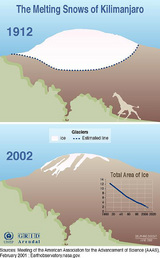 One such source is an article by Doug Macdougall of the Scripps Institution of Oceanography titled Jolting Messages on Climate Change. (The Chronicle, April 2006). In addition to his clear enunciation of global climate change facts and a strong call for "jolting messages" that will move "politicians and the public into effective action," Macdougall reviews five books about climate change published in 2005 and 2006:

According to Macdougall, each of these books have strong points. I encourage you to read Macdougall’s reviews, which are very even-handed. Some of the authors are more pessimistic than the others in terms of what can be done (via science, engineering, politics), but all agree on the scope of the problem. Most of the books do take on the sudden climate changes that were first observed in studies of the Greenland ice sheet.

Greenland’s ice loss is shocking, but it is hard to capture visually. For a very stark image of the advance in ice & snow loss, there are none more alarming than the satellite shots of Mt. Kiliminjaro taken in February of 1993 and 2000. Hemingway’s Snow is fast disappearing. (Note: I am aware that it is the ice that is disappearing, not the Snow. I am also aware of the raging debate on the causes of the warming that is leading to the vanishing ice. I will get to this point in a future post. For now, I merely report the evidence of warming itself.)

Given that melting snow & ice is correlated with higher temperatures, these pictures support the view that global warming is happening, but they don’t confirm that such warming is human-induced. This is where the political, ideological, and scientific debate hits the proverbial road up the creek without a mathematical model.

Just arguing about the causes is tantamount to doing nothing, however.

Given the nature of political debate in the U.S., and the dismaying statistics on U.S. attitudes towards science and science education, I can’t be anything other than pessimistic that a unified populace and government willing to pursue an active public policy averting (actually, it is more like stemming) global warming is imminent.

But my position is softened somewhat by a quote Macdougall relates from William Sweet’s Kicking the Carbon Habit:

Sweet is impressed by the force of the scientific evidence for human-induced global warming. "So strong is the consensus," he writes, that "journalists have begun to wonder whether their normal instinct to tell both sides of a story has actually led them to produce unbalanced work— giving skeptics about global warming much more leeway than they deserve."

However, I would argue that using the term "skeptic" is itself granting "leeway" to those whose arguing against the facts go beyond any informed skepticism, and often come from pure ideology and/or inadequate science education. (See The Evolution of the 40-40 Club for a recent post about the numbers in the US who believe in the status quo for science education.)

But what do I know? I actually believe that there needs to be more, and better, science education for all students. Then maybe we won’t argue and do nothing; we can argue constructively, and do something about the changing world around us.