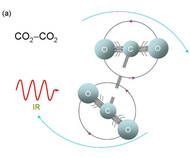 CO2-collision/absorbtionBelief in global warming, and especially the causes of GW (if one believes the data) depend crucially on modeling. The physics of atmospheric gases-solar radiation interactions, especially those involving carbon-dioxide molecules, is of major importance because the increase of CO2 is often quoted as a correlate to warming. The story is basically that CO2 absorbs some of the infrared radiation (IR) streaming to the earth from the sun, and reflects the rest back.

Just how much is absorbed? The answer to this question is a crucial one. Until recently, the basic physics of light absorption by gas molecules, though pretty well understood, doesn’t get the amounts of IR absorption correct for atmospheric CO2. Is this a failure of physics, or the model used?

Get serious. Of course it’s not the physics. To paraphrase, it’s the model , stupid. Physicists decide what goes into a model, and then the physics (in the form of fundamental laws) takes over, yielding the model prediction.

So the atmospheric CO2 - IR interaction needs a better model. Well, now there is one, and it’s very interesting because it depends on interactions between pairs of molecules via collisions that enhance IR absorption.

This model comes from Michael Chrysos and his colleagues Physical Review Letters, 4 April 2008) who have come up with a theoretical formulation that allows them to determine the effects of molecular collision on IR absorption. The derived formulas "allow researchers to look at how greenhouse warming -the capture of radiation and the subsequent sharing around of heat energy- comes about."

Not surprisingly, the lower one looks in the atmosphere, the more pronounced is the absorption due to collisions because of the higher pressure. Thus, "on Venus, where CO2 is the dominant atmospheric gas (96%) and where pressures are enormous, CO2-CO2 collisions provide the larger share of all greenhouse warming. " (Click here for the AIP press release.)

There’s all sorts of interesting physics happening during these collisions that I was not aware of. For example, an IR photon energy can split, transformed into kinetic energy of molecular translation and rotation of two molecules .

Theses new results allow scientists to more accurately describe the role of CO2 in global warming. Assuming that global warming is happening. This is especially important, because so many global warming naysayers use inaccuracies/contradictions in model predictions to disparage global warming believers.