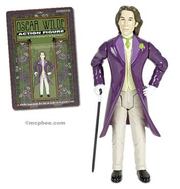 Mathematical inconsistencies are often nasty, unwanted, theorem-killers, and their presence is usually a sign of things gone awry. Actually, inconsistency and/or incompleteness is built into all of the mathematics we do - sort of. After all, Gödel showed that mathematics cannot be both consistent and complete.

Ahh, but words are a different story. Words are the atoms of sentences, and if somehow the sentence doesn’t make "sense", well, consider metal atoms that are frozen into a glassy state, but in fact want to be in a nice, regular matrix. These metallic glasses are then "inconsistencies."

So words that don’t quite form sensible sentences are like the atoms in a metallic glass..

Which brings me to aphorisms, about which I am prompted to write because of an interesting piece in the Dec. 7, 2007 Chronicle in which Jay Parini attempts to define and classify aphorisms (even though Umberto Eco claims that "there is nothing more difficult to define.")

One often-present feature of aphorisms is paradox, which often occur because of a sneaky self-referential quality. (e.g. "This sentence no verb"or "This sentence has six words" are classic paradoxical constructions - but they ain’t aphorisms.)

Whatever an aphorism is or isn’t, my image of the King of Aphorisms is Oscar Wilde, who skewers paradoxically: "An ethical sympathy in an artist is an unpardonable mannerism of style," a haughty comment that has its inverse aphorism in Groucho Marx’s classic "I don’t care to belong to any club that will have me as a member".

Note that the Wilde and Marx quotes are not really self-referential because they don’t refer to them selves as sentences in the way that "This sentence no verb" does. Nevertheless, there is a whiff of paradox that makes the aphorisms resonate.