As the World Turns - Foucault's Eco 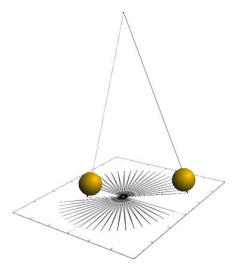 Feb. 3rd marked the 156th anniversary of Léon Foucault’s demonstration that the earth revolved on its axis. The experiment was brilliantly simple: let a large pendulum swing back and forth over the course of a day, with a sharp tip hanging off of the pendulum bob making patterns in a bed of sand below it. As the pendulum bob moves back and fort in a vertical plane the earth rotates beneath it, and this rotation can be measured by the marks in the sand. (For a nice intro to Foucault’s Pendulum, check out the scriptographic booklet on the subject at the California Academy of Sciences.)

Foucault did not stop with simply showing that the earth rotates. He was able to predict how fast the pendulum would appear to rotate because of the fact that the rate at which the marks carve out a pattern depends on the latitude of the pendulum. So, for example, at one of the poles the earth will spin once in 24 hours, while at the equator the earth does not spin with respect to the plane of the pendulum. Anywhere in between the amount of time it takes for the pendulum to make one complete rotation is given by

Here T is the time for the pendulum to return to its original position (in hours), and L is the latitude at which the experiment is carried out.

The pendulum demonstration was a huge success, showing as it did in a very simple way what could not be felt by earthly inhabitants - the rotation of the earth they were standing on. (It was also a majestic demonstration, being conducted in the the Panthéon in Paris.) The fact that Foucault could actually predict the exact timing of the rotation made him akin to the explorers who mesmerized remote villagers with abilities to predict eclipses, and he achieved physics rock-star status - maybe the most until Einstein.

There is a wonderful passage that starts Umberto Eco’s novel Foucault’s Pendulum, an abridged version of which I often read to my classes at some point during a semester, depending on the class (physics, differential equations, or chaos and fractals). I don’t believe that there can be any better homage to Foucault, in writing any more soaring than Eco’s:

That was when I saw the Pendulum. The sphere, hanging from a long wire set into the ceiling of the choir, swayed back and forth with isochronal majesty. I knew -- but anyone could have sensed it in the magic of that serene breathing -- that the period was governed by the square root of the length of the wire and by pi, that number which, however irrational to sublunar minds, through a higher rationality binds the circumference and diameter of all possible circles. The time it took the sphere to swing from end to end was determined by an arcane conspiracy between the most timeless of measures: the singularity of the point of suspension, the duality of the plane's dimensions, the triadic beginning of pi, the secret quadratic nature of the root, and the unnumbered perfection of the circle itself. ... The copper sphere gave off pale, shifting glints as it was struck by the last rays of the sun that came through the great stained-glass windows. Were its tip to graze, as it had in the past, a layer of damp sand spread on the floor of the choir, each swing would make a light furrow, and the furrows, changing direction imperceptibly, would widen to form a breach, a groove with radial symmetry -- like the outline of a mandala or penticulum, a star, a mystic rose. No, more a tale recorded on an expanse of desert, in tracks left by countless caravans of nomads, a story of slow, millennial migrations, like those of the people of Atlantis when they left the continent of Mu and roamed, stubbornly, compactly, from Tasmania to Greenland, from Capricorn to Cancer, from Prince Edward Island to the Svalbards. The tip retraced, narrated anew in compressed time what they had done between one ice age and another, and perhaps were doing still, those couriers of the Masters. Perhaps the tip grazed Agarttha, the center of the world, as it journeyed from Samoa to Novaya Zemlya. And I sensed that a single pattern united Avalon, beyond the north wind, to the southern desert where lies the enigma of Ayer's Rock. ... I knew the earth was rotating, and I with it, and Saint-Martin-des-Champs and all Paris with me, and that together we were rotating beneath the Pendulum, whose own plane never changed direction, because up there, along the infinite extrapolation of its wire beyond the choir ceiling, up toward the most distant galaxies, lay the Only Fixed Point in the universe, eternally unmoving. So it was not so much the earth to which I addressed my gaze but the heavens, where the mystery of absolute immobility was celebrated. The Pendulum told me that, as everything moved -- earth, solar system, nebulae and black holes, all the children of the great cosmic expansion -- one single point stood still: a pivot, bolt, or hook around which the universe could move. And I was now taking part in that supreme experience. I, too, moved with the all, but I could see the One, the Rock, the Guarantee, the luminous mist that is not body, that has no shape, weight, quantity, or quality, that does not see or hear, that cannot be sensed, that is in no place, in no time, and is not soul, intelligence, imagination, opinion, number, order or measure. Neither darkness nor light, neither error nor truth.

The power of Foucault’s idea will continue to echo through the centuries, reminding us that, even though we believe ourselves at the unmoving center of all things, it is we who all move as one.