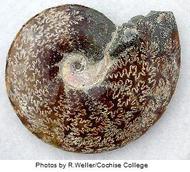 Complex SutureSteve LaMonte, a student in my Fall 2007 version of Chaos and Fractals, has noted the fractal-like shapes that are formed by suture lines in ancient cephalopods. He points out the correlation between fractal structure and the ability of the cephalopod to withstand extremes of water pressure. He writes:

One often pictures fractals as consisting of pretty pictures generated by computer programs, but they are quite prevalent in nature. A notable example can be found in the fossils of ancient cephalopods, specifically nautiloids and ammonoids. Nautoloids and ammonoids are the ancient ancestors of modern squids, octopi, and the nautilus. The ancient organisms looked like modern squids and octopi with shells, some elongated and some coiled like a snail. These shells had internal chambers that the organism filled with gas for buoyancy. Each chamber is separated by a wall, or septa. The contact line between the septa and the inner shell wall is called a suture line. The structure of the suture line determines how well the organism can resist water pressure and adjust its buoyancy. The evolution of suture lines follows an increasingly fractal-like pattern from straight sutures to highly undulated sutures. In complex sutures, the dips and folds in the undulations are called lobes and saddles, respectively. Paleontologists (Daniel et al. 1997) have found that simple sutures, as in Permian (290 – 248 million years ago) nautiloids and ammonoids, are very resistant to high pressures, but are poor for buoyancy regulation. As a result, such organisms moved slowly. Conversely, the more complex suture lines of Cretaceous (144 – 66 million years ago) organisms have less pressure resistance along with excellent buoyancy control. These findings indicate that the evolution of Cephalopods proceeded from high-pressure deep water to low-pressure shallow water over millions of years, with increasing complexity in suture lines to compensate. Daniel, T.L., B.S. Helmuth, W.B. Saunders, and P.D. Ward. 1997. Septal complexity in ammonoid cephalopods increased mechanical risk and limited depth. Paleobiology 23(4):470-481.

Complex suture closeupAlong with fellow student Christine Quinn, Steve created and maintians the What Lies Beneath wiki. Visit the wiki to find out how Chaos Theory has been applied to groundwater remediation, a growing concern in environmental protection, along with information on basic Hydrogeology. You’ll also find many more pictures of the cephalopods described here, and several other fractal & chaos-related topics.