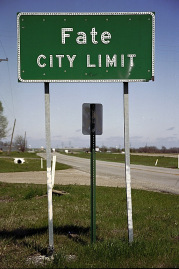 Chaos Theory is often cited as a way out of the determinsim-free will paradox. The explanation usually goes like this: OK, everything is determined by physical law, but the laws themselves are non-linear and the output of a particular equation that codifies a law often leads to a pseudo-random process and/or sensitive dependence on initial conditions. Ergo while we are governed by strict physical laws, our behavior - and by implication our decisions - do not give the appearance of being constrained in any way.

The philosophical position that free will can co-exist with determinism pre-dates chaos theory, with Hume and Hobbes early proponents. Known as compatibilism, it stands on its own without chaos theory. Much of the compatibilist argument rests on a careful definition of what it means to act freely, leading to a so-called category error.

The compatibilist definition of free will states that free will is not the ability to choose as an agent independent of prior cause, but as an agent who is not forced to make a certain choice. Determinists argue that all acts that take place are predetermined by prior causes. Because human decision is an act that is not exempt from prior cause, by this definition, some determinists known as hard determinists believe that free will thus becomes an illusion. A compatibilist, or soft determinist, in contrast, will define a free act in a way that does not hinge on causal necessitation. For them, an act is free unless it involves compulsion by another person. Since the physical universe and the laws of nature are not persons, they argue that it is a category error to speak of our actions being forced on us by the laws of nature, and therefore it is wrong to conclude that universal determinism would mean we are never free.

Chaos theory does not really add to this argument - but it does provide an example of a totally deterministic system whose output may be unpredictable. The connection of this system behavior to free will is tenuous at best.

The better way to view the effects of a deterministic system, i.e. us, and free will is provided by John Timpane, an editor of the Philadelphia Inquirer writes in his March 2007 article The Future of Free Will

Sure, we're machines and subject to all the laws that govern everything. No one gets a pass from those. The human mind has a structure and a set of rules - but that produces rather than constrains its ability to make an incredibly large number of novel and creative uses of those rules. Indeed, the more we know about the mind, the more we are stunned by its ability to resist instinct and put the rules to new uses.

For an excellent summary of current trends in the free-will determinism debate, as well as experimental neurological studies that tend to bolster the compatibilist view, see Dennis Overbye’s Jan 2007 NYTimes piece Free Will: Now You Have It, Now You Don’t. In a telling quote, Overbye points out that Einstein had no problem with a deterministic system leading to the appearance only of free-will: “This knowledge of the non-freedom of the will protects me from losing my good humor and taking much too seriously myself and my fellow humans as acting and judging individual.”

For a more skeptical viewpoint, check out Daniel Bader’s Lyceum blog, where he writes on introspection and psychological deteminism. (The FATE city limits sign is from this site)