Chaos & Complexity in the Evolution vs. Intelligent Design Debate 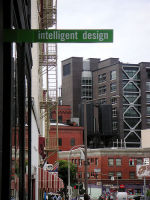 The 12/20/2005 ruling by Judge John E. Jones 3d in the Kitzmiller vs. Dover Area School District case may be a landmark one. In his far-reaching decision, Jones rules that:

The overwhelming evidence at the trial established that ID is a religious view, a mere re-labeling of creationism, and not a scientific theory.

More to the point about whether ID is really science:

… we find that, while ID arguments may be true, a proposition on which the court takes no position, ID is not science. We find that ID fails on three different levels, any one of which is sufficient to preclude a determination that ID is science. They are: (1) ID violates the centuries-old ground rules of science by invoking and permitting supernatural causation; (2) the argument of irreducible complexity, central to ID, employs the same flawed and illogical contrived dualism that doomed creation science in the 1980’s; and (3) ID’s negative attacks on evolution have been refuted by the scientific community

(Click here for the complete judicial ruling)While Jones’ ruling is a wonderful relief (which may only be temporary) from the problem of religion driving what can be taught, regardless of facts, I have been disappointed by the lack of explanations in the mainstream media about the contributions of chaos and complexity theory to our current understanding of evolution.As Judge Jones clearly understood, the ID fight against evolution was based on a “contrived dualism” - i.e. one either believes in evolution, or believes that a Supreme Being initiated the first living organism(s) via design. ID proponents attempt to manipulate opinion to accept this dualism by claiming that Darwinism (as ID supporters always refer to evolution - itself a way designed to insinuate a cult-like “ism”-status to the science of evolution) can not explain the origin of life. Indeed, evolution does not try to do this - a fact pointed out by Charles Darwin himself, whose work is on the evolution of species. Further, ID states that living organisms are “irreducibly complex”, meaning that they cannot arise via random mutation and natural selection; instead they bear the unmistakable signature of an “intelligent designer.“This is where chaos and complexity come into the picture. Complexity theory, which has its basis in chaos theory, has shown great promise in explaining how spontaneous order, often referred to as self-organization is a universal path for any biological system that reach a minimal level of complexity. Thus evolution’s natural selection is aided and abetted by self-organization in such a way that random mutations are effectively channeled into a much smaller space of possible outcomes. This restriction does two important things: (1) it makes it much more likely that a complex organism will develop via mutation and natural selection; and (2) the time needed for the complex organism to self-organize and evolve is not so long as to be longer than the accepted age of the earth. 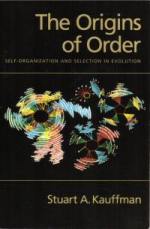 This argument is a direct counter to the ID claim that random mutation and natural selection cannot explain the complexity of a living organism. (The Origins of Order, by Stuart Kauffman, is the seminal work in this field. With a title clearly an homage to Darwin, Kauffman definitely sees his work as not just an extension of evolutionary theory, but an effort to put evolution in a larger box of “complexity.” Kauffman is a theoretical biologist who has written extensively on the edge between chaos and disorder. )A search of the full judicial ruling (139 pages!) does not show any reference to Kauffman’s work. I don’t know if it was brought up at all by the plaintiffs during the trial, nor do I know whether Jones is familiar with the self-organization argument. Luckily for all of those who believe in the process of scientific inquiry, Judge Jones was able to see through the ID arguments. I believe that his task would have been easier if there had been more public knowledge of the complexity theory results of Kauffman and others.Here’s a wish that popular media accounts of scientific/cultural/political debates won’t leave out the pertinent science under the assumption that the viewing/reading public won’t understand, or will lose interest. (Note that a discussion of chaos theory is never present in mainstream media accounts of global warming and weather.) Including the science might not deter those who wish to remove certain scientific facts and theories due to religious conviction, but it will go a long way towards ensuring that the general public has a better understanding of what science is, and what it isn’t.Click here for more information and provocative articles from both sides of the evolution vs. ID debateThe Intelligent Design image at the top of this post is from a Portland interior design firm. The photo was taken by Molly Holzschlag