Constructal Theory of Everything? 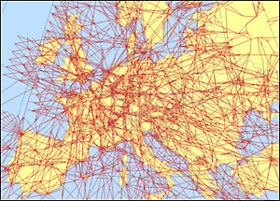 A very interesting text that describes what appears to be a bold new approach to modeling many possible systems - even human ones - is about to be released. Titled Constructal Theory of Social Dynamics and edited by Adrian Bejan and Gilbert W. Merkx, the text "brings together for the first time social scientists and engineers to develop a predictive theory of social organization, as a conglomerate of mating flows that morph in time to flow more easily (people, goods, money, energy, information). These flows have objectives (e.g., minimization of effort, travel time, cost), and the objectives clash with global constraints (space, time, resources). The result is organization (flow architecture) derived from one principle of configuration evolution in time (the constructal law): "for a flow system to persist in time, its configuration must morph such that it provides easier access to its streams."

Begin and Merkx are from Duke. The Duke press release is very enticing - this is certainly a text that will serve as a reference for the chaos and fractals course, or perhaps a primary source.

Why does a railway network look like a river? Why do the streets of old Rome look like a leaf? Because whether their shape is determined by the interactions of molecules or the choices made by individual humans, all of these systems of flow are governed by a relatively simple new principle of thermodynamics. "Society, with all its layers and features of organization, is a flow system," say co-editors Adrian Bejan and Gilbert Merkx of Duke University. Consequently, these repeating patterns are no accident. "Coincidences that occur in the billions are loud hints that a universal phenomenon is in play." First described a decade ago by Bejan, a professor of mechanical engineering at Duke, the constructal theory is a deceptively simple explanation for why these branching patterns occur so frequently: for a flow system to persist in time, its configuration must change such that it provides easier access to its currents. Simply put, if something is flowing, it will branch in a fairly predictable pattern to reduce imperfections like friction, or in this case, bumping into pedestrians coming the other way. "Natural systems will always move toward faster access or easier flow," Bejan said .... Constructal theory fits well with network theory in sociology and helps explain why the large patterns persist even where there's free will and consciousness.

I had not heard of constructal theory until recently, when Bill Weaver of La Salle’s ISBT program alerted me of the Bejan/Merkx text. Reading more on Bejan’s web site sure makes it sound as if it is the NEXT BIG thing. For further proof, consider the Constructal Theory Web Portal, which lists an amazing range of applications, such as

If it sounds as if Constructal Theory can be used for anything at all, you’re not far off the mark. Read Bejan’s The design of every thing that flows and moves for an impressive - (even if there is a bit too-good-to-be-true-ness about it all) projection of a Theory of Everything - that moves, at least.

Most audacious abut the projections, though, is that the 2nd Law need not apply:

The word entropy does not appear in constructal theory. Entropy is the word and concept of the second law of thermodynamics, which it serves very well. The physics covered by the second law is the phenomenon of irreversibility: every thing flows from high to low ... The occurrence of organization (configuration, macroscopic complexity) in nature is an entirely different phenomenon. This phenomenon calls for its own principle and concepts. The constructal law answered this need. The words that appear in the constructal law are the generation of flow configuration, in time.

I am looking forward to more on Constructal Theory - to see whether it can deliver on the exuberant projections. It may be that CT does a great job of predicting - with or without understanding. Meanwhile, I applaud any effort that attempt to find unifying laws of organization, which by definition, will make the modeling of many more situations conceivable in principal.

Of course, this may mean that chaos theory itself has to take a back seat to constructal theory. If Bejan had his way, chaos would be left off the bus, as can be seen from his interview in Seed magazine:

"What I'm telling you is totally, let's say, the upside-down of what the proponents of chance and non-determinism have been promoting for more than a hundred years." Bejan said. "This is—how should I say—the end of the story. The end of the argument. A law of physics that says it all, and it takes less space in a future physics book than all this debate that currently has led to things such as chaos and chance and fluctuations and turbulence and other buzz words that mean 'I don't know.'"