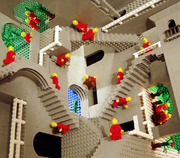 Escher Legos. Click to enlarge.In his book God’s Universe, Harvard astronomer Owen Gingerich attempts to reconcile intelligent-design and evolution. This seems to be an almost impossible task, so I was curious as to how Gingerich would approach this division.

Unfortunately, the reviews and descriptions I have read leave me bewildered because Gingerich’s argument seem to be of an anticipated form, namely that God created the laws and then let everything develop on their own.

Gingerich does riff on the idea that the physical constants and various energy levels of appropriate atoms are so fine-tuned as to allow life - (shades of the anthropic principle!) that there is some "higher purpose." So what then is different in his argument from intelligent-design? God created the building blocks and the physical laws and just stood back and watched. This is not so different from the views of many scientists, so I’m not sure where Gingerich is headed that adds anything to the debate. Unfortunately, in the quotes I have read, he does seem to rely on an unsubstantiated claim of an underlying imperative for the existence of our universe, and, by extension, all of us:

"There may be no architect with a plan for the final product, but there is the designer of the set of little interlocking parts. And the existence of the set itself cries out for something to be built with it," he writes, "like having a giant and very complex Lego set supplied without a blueprint."

Sorry - this argument is a shade too teleological for me. It seems unlikely that a strict I-D supporter would include Darwinian evolution as a God-willed/designed process. Similarly, would a strict Darwinian soften in terms of allowing a little bit of design to creep in - even if just to jump start the whole evolutionary process?

I doubt it, although the latter may be more probable. Some Darwinians would probably go along with this idea because it is basically unverifiable, and hence not in the realm of science. As long as God doesn’t reach in and tinker with the cosmic Legos, they’ll most likely concede the point in order to proceed with their own research from a slightly higher ground.

At the very least, the Lego reference is always sure to fire up the imagination of anyone who had a set when they were young. It sure seemed then that anything - from houses to trucks to people - could be built out of the same Lego-stuff. The Lego diorama of Escher’s Relativity appearing at the top of this post shows that Lego-stuff can be used to model non-existent worlds also. Created by Andrew Lipson, Relativity is only one of his amazing Lego renditions of some of Escher’s most famous works.