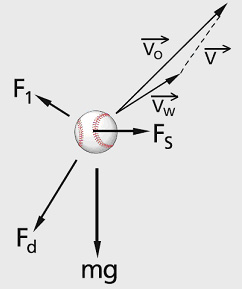 How Does a Baseball Fly?I’m loving the controversy swirling around the opening of the new Yankees Stadium. The number of home runs hit is already far exceeding the pace of past seasons, leading to the inevitable pointing of big, angry New York fingers at those who are at the front lines, or at least at the foul poles, of stadium building.

That would be the wind modelers, of course.

Give them a Bronx break. The complexities involved in predicting airflow over such a complicated shape are staggering. Wind tunnel simulations using scale models of the stadium can only provide so much information - mostly about macroscopic responses of structural elements to wind gusts. (Just think about how tiny the balls and bats would have to be in order to simulate the home run frequency.)

The new stadium has the same dimensions as the one just demolished, so the homer explosion must be due to the different wind patterns that exist. The outside shape of the stadium, it’s different compass orientation, concourse dimensions, angle of the seats, are just a few of the possible design suspects leading to the homer fest currently playing out.

Of course, knowing why a baseball flies the way it does is an essential component of any prediction. It is certainly not clear that wind modelers know this physics, or whether they talk to those who do. Maybe if they read How does a baseball fly? the baseballs would not be flying the way they are in the Bronx. This site was put together by Rowan Williams Davies & Irwin Inc, a “wind engineering and microclimate consulting firm” that have modeled wind conditions at a number of American League parks.

Major League Baseball takes HR’s very seriously because of the potential ratings they produce. But statisticians are even more serious, trying to come up with a way to compare the HRPF (Home Run Park Factor) of different ballparks in an effort to determine which one is the most favorable for hitting home runs. Check out the analysis of Greg Rybarczyk, who leaves no seam unstitched in his quest for quantitative surety. Rybarczyk uses Hit Tracker, a true baseball junkie’s website that contains the parameters of all home runs hit, allowing for the total flight distance to be calculated. Let him describe his obsession…

Hit Tracker in its usual form uses observations of hit outcomes (landing point, time of flight) to derive the hit’s initial parameters (Horizontal Launch Angle or HLA, Vertical Launch Angle or VLA, and Speed off Bat or SOB, with spin assumed to be a function of these factors). But, with a few lines of code added, it becomes "Hit Whacker," using HLA, VLA, SOB and atmospheric inputs to generate a hit’s outcome. With this capability, we can create a procedure for assessing how easy or hard it is to hit homers in any park. To cover the range of possible batted balls that could become homers, I created a “test set” of trajectories, representing 45 different HLA’s (every two degrees from foul line to foul line), 41 different VLA’s (15 to 55 degrees) and 26 different SOB’s (95 to 120 mph). That’s 47,970 different fly ball paths! I ran this complete test set in each park, in that park’s actual altitude, in the park’s average game time temperature from 2002-06, with no wind (I’ll describe how to account for different winds shortly). The trajectories were evaluated as “home run” or “not home run”, and the results were compiled.

Hit Tracker sample output. Click to enlargeI won’t list the results here, which are listed by Rybarczyk at the Hardball Times site. These results date from 2007, so the new Yankee Stadium is not yet analyzed.

Now a lot of HR’s are not a bad thing, of course. Hailing from Philly, I can tell you that Ryan Howard’s blasts sound like a home run should. When the balls heave his bat, it’s almost possible to imagine that his swing created the vortex that carried the ball along with it into the upper deck in right field. Let’s not forget that Citizen’s Bank park was roundly blasted for the first few years of operation because of its too-friendly confines for hitters. Pitchers were scared of signing with the Phils because of the imminent danger to their ERA and subsequent contract potential.

How did this turn out? With the correct set of starting and relief pitching, the Phillies won the World Series in 2009 - thank you very much.

And now, back to Yankee Stadium. Even the best modelers are often way off base in their predictions because of the chaotic nature of weather and climate. In the ballpark case, it’s hard to get more non-linearly complex than the interaction of the vector field of the wind velocity and the spinning baseball. Perhaps the best answer to why the new park is such a Home Run zone is a blog comment posted by one of the Bleacher Bums. It is an analysis of Hemingwayian economy and precision: The Middle Relievers S*CK.