DNA in Series and Parallel 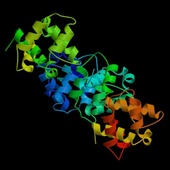 quattro-colored dna pastaModeling biological systems sure seems to be radically different from modelling something such as a chain of balls on springs. For balls on springs, Newton’s 2nd law is written for each mass, yielding a pretty straightforward system of differential equations. The positions and velocities of the masses in time are the solutions to the system. Each variable x(t) in any of the differential equations refers directly to the actual position of a specific mass. For bio models, however, modeling is done more at a meta-level using a systems approach. For example, you wouldn’t normally see Newton II applied in pharmokinetic modeling; instead a compartment model where the compartments are body systems such as blood stream, gut, etc. is typically used, often with great predictive power.

Modeling with discrete maps seems even more systems-like, because most maps don’t have explicit time behavior instead the population is often just a function of the previous population value. Sometimes the interactions are not even explicit. Because of this, chaotic behavior can be observed in a simple 1-D map, with the logistic map being the most famous. A 1D map is about as far from the actual physical situation as you can get!!

To me, the differential equation and discrete map approaches seem more mathematical than physical. They allow one to predict without an awful lot of understanding. Using Newton 2 to model a chain of balls on a spring is somehow different. Even though a differential equations system is used, the terms in the equations have a real immediacy because they refer to the fundamental concepts of position and velocity.

With population modeling being one of the mainstays of chaos theory (thanks to the work of Robert May and many others), it’s nice to see a new approach to population modeling that is likely to provide more understanding without skimping on the prediction.

In an exciting crossover between disparate disciplines, ecologists are now investigating the use of elementary electrical circuit models in modeling the flow/change of DNA as species migrate.Apparently they are finding very good results, i.e. the predictions of the models are quite accurate. The explanation for the results is straightforward: genetic "flow" is hindered when migration routes are blocked or crowded in an analogous way to electrons in a resistive material. Decrease the resistance by opening up more "corridors" for migration, and you have a set of parallel resistors - and overall lower total resistance. More genetic flow.

This work is spear headed by Brad McRae who works at the National Center for Ecological Analysis and Synthesis in Santa Barbara, California.

Does this new modeling make it easier to understand how species migrate? For me, it does. I can picture an animal as an electron, moving through a circuit I understand as well as predict because rich contextual words such as corridor and crowded carry such real-world heft.

I’m fascinated by the irony here - in order to get an understanding via a model of a biological species, the members of the species are modeled as inanimate objects.

You could say that I get a charge out of it.