Do E-fields Cause or Hinder Cancer? 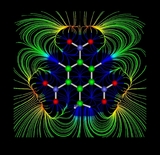 Field near a TNT molecule. Click to enlargeWith the ongoing debate about potential health hazards of living near radio/TV towers, or the dangers of extensive cell-phone use, it is reassuring to see the latest news on the efficacy of electric fields in slowing down some cancers. (Of course a skeptic might claim that the news is a spin job by cell operators to get activists from fighting the placement of towers and cell sites near population centers.)

Nevertheless, the study is intriguing because it describes a set of potential reasons why the E-fields might be the causal agent for the stunted cancer growth.

In vitro, the electric fields were seen to have two effects on the tumor cells. First, they slowed down cell division. Cells that ordinarily took less than an hour to divide were still not completely divided after three hours of exposure to an electrical field of 200 kHz... What causes cell division to slow down" In the 200-kHz case, the electric fields hamper the formation and function of a key cell structure known as the mitotic spindle. The spindle is composed of cell components known as microtubules. The microtubules in turn contain components that have a high electric dipole moment, in which there is a large separation of opposite electric charges. Therefore, parts of the mitotic spindle are greatly influenced, and apparently disrupted, by an electric field. The second effect of the 200 kHz fields is that they sometimes disintegrated the daughter cells just before they split off from their partners. The dividing cells sometimes destruct because a high-electric-field region develops between the two daughter cells. This leads to a large slope, or gradient, in the electric field from each daughter cell to this region. This gradient may rip organelles (cell structures) and macromolecules (such as proteins) from the scaffolding of the cells.

The possible contribution of the fields in the 2nd effect is interesting. Undoubtedly a mathematical model that imagines the stated macromolecules as simple dipoles with site-specific adhesion to the underlying cell (the cell "scaffolding" mentioned above) could be developed to calculate the effect of field gradient strength and frequency on the stated macromolecules. In this way the model could be used to predict fruitful frequency/strength ranges where the slowing down of cancer growth is done most efficaciously. A model that is based on a physical model of what might be occurring is one that has a good amount of "understanding" built in, i.e., it is not merely predictive. In this case, I assume that this modeling has already occurred, and that new experiments will be informed by the predictions of the model.

Back to the skeptics - while cell division might be stopped in some cases by the Field, in others the field might actually lead to mutation and enhanced cancer cell growth. And what’s really interesting here is that the enhancement can be imagined as due to the same mechanism as the growth slow-down, i.e. a field gradient being strong enough to induce growth.

Either way, the new E-field results open up a rich source of research possibilities with clinical potential.

Note: the graphic at the top of this post comes from the Collaborative Computation Project funded by the Science and Technology Facilities Council (sort of a UK version of the NSF)