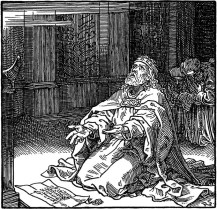 In Prayer: A Neurological Inquiry Skeptical Inquirer author David Haas asks "Are silent prayers transmissible to, or readable by, a supernatural being?" He then attempts to answer this question using "modern information about the brain."

Haas makes a distinction between thoughts and prayers and the underlying brain activity, stressing the non-naturalness of the prayer processes:

"The brain, an electrochemical organ, consists of matter and energy, but the mental states that are the epiphenomena of its physiological processes are neither material substances nor forms of energy …If thoughts—including silent prayers—are not a form of energy, then there is no known natural means by which they could be transmitted beyond ourselves or read within us. "

Haas then gets to his main question - "Though thoughts and prayers are neither transmissible nor readable by any natural means, could they be known to a supernatural being?"

This is a provocative, $64,000 Question, one which cannot be answered to anyone’s satisfaction, but one that leads to all sorts of meta-issues involving all-knowing and all-powerful deities.

Unfortunately, Haas trips up immediately. Here’s how he wishes to answer the question of whether prayers can be known to a supernatural being:"Evidence for or against this can be obtained by determining whether prayers are followed by what was solicited by them."

That is, Haas wishes to base his conclusions on whether or not the prayers were answered. He goes on to cite a number of studies that have failed to find a therapeutic effect of intercessory prayer. (In a previous post I noted that The Templeton Foundation had funded one such study. )

The fallacy of Haas argument is stunning - just because a prayer is not answered does not mean that it was not sent, and/or that it was not received. Note that the reasoning would cut both ways: if there had been some therapeutic effect found, it would still not verify that a supernatural being had received the prayers and acted on them.

"Whether they can be known to a supernatural being hinges on the effects of the prayers’ solicitations as judged by proper scientific studies. To date, such studies of intercessory prayer have not shown it to improve health-care outcomes. In contrast to thoughts themselves, the brain activity from which thoughts arise does consist of energy—electrochemical energy within neural circuitry. Reading this teeming energy in millions of circuit neurons and translating it into the thought or prayer arising from it seems theoretically impossible for even a supernatural being."