Grim Data for Grim Modeling: Oppenheimer and The Halifax Explosion 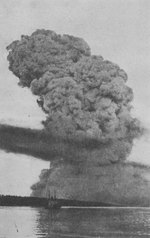 Mushroom cloud over Halifax. Click to enlarge. In my previoius post I described some of my thoughts about the teaching of differential equations that model death in some way - via overpopulation, disease, and war - what I call Grim Modeling.Perhaps the grimmest modeling of them all, however, is modeling associated with the design and delivery of atomic weapons - your basic WMD.An essential step in any mathematical modeling is the correlation of the model output with the world, i.e. you need to have some data that supports your model. This is especially true if the model is to be used as a starting point for an extrapolated prediction. By this I mean that t –> infinity, or a parameter is taking on a value much larger (or smaller) than was the case for the situation that produced the data being used to check the model.Could there have been any mathematical exercise more fraught with danger than the modeling done by J.R. Oppenheimer and his team of scientists on the Manhattan project? In a very short time (the summer of ‘42 ), a group of physicsts, chemists, and engineers managed to develop the theory of nuclear reactions in an atomic bomb, the engineering required to design and construct a deliverable weapon, and model the effects that the atomic blast would have on a city and its population.Model the effects of an atomic blast? What type of model was this, and, more important, what data could possibly be used to validate the model as one that could be trusted? This was not an idle concern - some on the Manhattan Project believed that an atomic bomb blast would start a chain reaction that would spread through the earth’s atmosphere - in effect blowing up the earth.Oppenheimer’s search for blast data took him to a most unusual location: Halifax, Nova Scotia. In a terrifying incident that is still very little known (at least outside of Canada), a French munitions ship exploded in Halifax harbour towards the end of World War 1. The ship was loaded with a highly combustible mixture: 2,300 tons of picric acid (used in manufacturing explosives, particularly artillery shells), 200 tons of TNT, 10 tons of gun cotton (which has a history of spontaneous explosion) and 35 tons of benzene.The blast is claimed to be the largest man-made explosion before the atomic bomb. The ship itself was reported to be “vaporized” - nothing remained in the harbor, but pieces of the ship were found embedded in the walls of buildings through the city. The anchor was found 2 miles from the blast site. Up to 2000 people died, many of them children in schools that ringed the harbor area. The explosion produced what is believed to be the first mushroom-cloud (seen in the above image) . The tales of shock, misery, and grief from that time are eerily parallel to 9⁄11.

The story goes that Oppenheimer and his group of theoreticians and engineers met at Berkely during the summer 1942 to carefully go over all aspects of the potential atomic bomb known at that point. In addition to the physics and chemistry and engineering, they needed to predict the yield of the weapon. Oppenheimer and his crew used the reports of the Halifax blast damage to model the destruction that would be caused by the atomic bomb. Scarily, they had to multiply the Halifax effects by many orders of magnitude.More scary, the estimates were very close to the mark.No wonder that Openheimer’s thoughts on witnessing the first succesful testing of an atomic bomb comes from the Bhagavad Vita: “I am become death, the destroyer of worlds. “You can view a film clip of Oppenheimer describing the blast and his quote at the Atomic Archives.For more on the Halifax Explosion, see the recent book by Laura Mac Donald titled “Curse of the Narrows”. The book has received very good reviews, with claims that it is the “definitive account” of the disaster.Finally, as a finalist in the Totally Inappropriate Team Name category, there is a fantasy football team named The Halifax Explosion in the Bay Area Custom Football League.