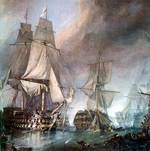 Battle of TrafalgarI often wonder how appropriate it is in an Intro. Diff Eq. course to discuss the darker side of modeling - the business of modeling death and destruction via war, terrorist activity, or plain, old-fashioned man-made disaster. (I have no qualms about this in our Chaos and Fractals course - after all, one of the goals of the course is to consider the ramifications of the pervasiveness of mathematical modeling in all aspects of society, and especially in areas where religion, philosophy, and politics intersect.)But back to Differential Equations - basically a mathematics course where students get their first real concentrated exposure to applied mathematics and modeling via basic calculus.It seems OK to discuss population models such as the Logistic equation, where growth rates go negative for population values exceeding the carrying capacity of the ecological niche. The logistic equations is, after all, a sterile shorthand for what is an accepted “law of the jungle,” at least for animals: if there ain’t enough food, you die.And there doesn’t seem to be any queasiness among students when a Lotka-Volterra model is used for a Predator-Prey system. This again may be explained because it is a fact of life on the other side of the human/animal divide - eat and be eaten, in an endless cycle of life and death. Or maybe it’s because the use of cute function names - R(t) and F(t) for rabbits and foxes - provides a welcome relief from reality due to the abstractness of the notation: we don’t feel the rabbits’ pain, or wince at the growth of the Rabbit-Fox interaction term when dR/dt<0. Epedemiology is a fertile source of models for Diff. Eq., but even here what is being modeled may be especially stark. (See Deterministic Modeling Of Infectious Diseases:Theory And Methods, a thorough review of disease modeling by Helen Trottier and P. Philippe of the Univ. of Montreal). In this case, an ambiguous use of English can go a long way towards not having to think about the grim reality of what the models often predict.Consider the simple SEIR model for time-evolution of infection disease, where the acronym for the dependent functions comes from

The really interesting part of the model for me is the R(t) function, only this time it’s not rabbits we’re talking about, but (usually) people. Note that R is listed as “removed” or “recovered.” Which one of these interpretations is used depends on the disease. “Recovered” is an obvious possibility for a person contracting a disease. However, “removed” can be viewed as either “removed from” the disease-threatened population via hospitilaztion, quarantine, immunity, or, more starkly, “death.” The mathematics will be the same, regardless of interpretation, but the macabre-ness of modeling a deadly Ebola outbreak can be held at arm’s length by using the word “removed.” The net result is that I always describe the SEIR model (or one of its variants ) in Diff. Eq. - using “removed” (and I ask the class for how they interpret the word).But what about war? Mathematicians in armed-forces war colleges, government labs, and think tanks are routinely engaged in predicting everything from mortality rates in infantry and tank combat to ground-zero death counts in atomic-bomb blasts to genetic mutation rates in a post-atomic Armageddon.(e.g. see Combat Modeling With Partial Differential Equations , a publication of Oak Ridge National Lab - my former employer ) How much of this type of modeling, or the specific models used, should be discussed in Diff. Equations?I go back and forth on this question - because of the fact that the models are usually used for predictive purposes, i.e. the military want to know what will happen when they begin their business - killing. Even with this wavering I always decide to do at least one simple model - the basic Lanchester model for aimed fire, although here I use it as explanatory rather than predictive - e.g. explaining the ship counts in the Battle of Trafalgar.Ultimately, I believe that it is very important for mathematics majors (who typically make up most of a Diff Eq course at La Salle) to consider the ramifications as well as the techniques of mathematics.
Categories   Mathematics   Modeling   War & Weapons