How to read a REAL Climate Modeling article 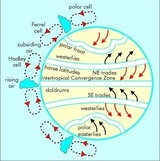 Diagram of General Circulatin ModelBolstered by the anti-climate-modeling stance of Michael Crichton, there are many out there who claim that climate modeling that predicts global warming is somehow "bad science." I’m not sure many of these folks have ever read a real climate modeling paper (or any who believe that climate change is occurring, for that matter)

It is instructive to try to wade through a serious paper that points out the difficulties of modeling on the one hand, but also presents very confident predictions of the model described in the paper..

By chance I recently came across a paper written almost 2 years ago by Jian Yuan, Qiang Fu (Department of Atmospheric Sciences, University of Washington) and Norman McFarlane (Canadian Centre for Climate Modeling and Analysis, Victoria, British Columbia). The name of the article is forbidding: Tests and improvements of GCM cloud parameterizations using the CCCMA SCM with the SHEBA data set.

The article describes the wide variability of different models of the Arctic, and how the authors re-formulated cloud interactions, yielding a model whose output is much closer to actual recorded data.

For the uninitiated, trying to read this type of paper seems impossible. You can get a lot from it, though, by reading the abstract, intro, and conclusion. (This is something I do in the Chaos and Fractals course - i.e. have students read and dense papers in areas outside of their majors - an essential activity for all scientists).

This article, and many others like it, point out the organic way in which modeling is done: very rarely does a model work (i.e. match what is observed, or not produce non-physical answers) right out of the box. Instead, there is tinkering - lots of it. Tinkering that is motivated and suggested by physical reality, and sometimes mathematical elegance. The point is that modeling is itself an experimental science, with different researchers adding to a foundational base.

Those who claim that climate science modeling is bad science tend to see these natural discrepancies as some problem with the process of modeling. (Note - I am not describing climate scientists who dispute the models - they are free to make their own models, after all). This argument is classic Straw man fallacy. I plan to make this article a required reading for the upcoming Chaos course, to be juxtaposed with an appropriate Crichton piece.

Note: the image in this post is from the Online Encyclopedia