In Search of the Fastest Rubik's Quark in the World 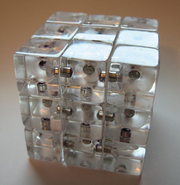 Magnetic/Acrylic Rubik by NTronicsThere’s a great scene in the Pursuit of Happyness in which Christopher, the protagonist played by Will Smith, becomes infatuated with his son’s Rubik’s Cube, and ultimately goes on to be a Cube Solver. In a chance encounter with a stockbroker he is trying to impress, Chris/Will solves the cube - a feat that blows away the broker, and which leads to an interview, and then…I won’t go on here - rent the movie, it is a good one, and based on a true story.

Back to the Cube. Jessica Fridrich of SUNY Binghamton, who completed a Ph.D. in non-linear dynamics (Removing observational uncertainty from orbits of nonlinear dynamical systems) is something of a cube speed freak. Consider that she won the First Czechoslovak Championship in Rubik’s Cube in 1982. At the top of her game she " routinely solved the cube in an average time of 17 seconds…actively using more than 100 algorithms." You’ll find some of her solution techniques and algorithms here. You’ll also find links to other speeders, including sage advice on how to grease your cube.

Click here for the official list of cube speed record holders. The current fastest is 10.48 seconds by Toby Mao of the US who solved the cube in 10.48 seconds at the 2006 US National Championships in San Francisco. (The 10-second cube must be the analogue of the 4-minute mile.) A more fun list is of unofficial records, which includes the fastest times for cube solving in such exotic categories as blindfolded using one-hand, feet only, and underwater.

Shortly after the cube became popular, I remember reading a Scientific American article that described a deep connection between possible cube configurations/operations and particle physics - specifically quarks and quark confinement. This was based on the work of Solomon Golomb of USC (he may have been the author of the article - I have not been able to find it by searching).

As recounted by William Bader:

Solomon Golomb of the University of Southern California relates twists on corner pieces to elementary particles made from quarks...Quarks have fractional electric charges of 1/3 and 2/3 the same way that corner pieces on a cube can have twists of 1/3 and 2/3. Positive charges correspond to clockwise twists, while negative charges correspond to counter-clockwise twists. Quarks always combine into particles with an integral charge; a quark and anti-quark pair form a meson, while three quarks form a baryon. For example, a proton is a baryon with two up quarks and a down quark, while a neutron is a baryon with one up quark and two down quarks. In the same fashion, unless you take a cube apart, the twists on the corners always add up to an integral value. You can twist one corner clockwise and another counter-clockwise, or you can twist three corners in the same direction, but you can not twist a single corner alone, and you can not twist only two corners in the same direction. This is the Rubik's Cube analog to quark confinement. It is possible that someone living in a higher dimensional space could reach into our universe, extract a lone quark, and return it in a different state, the same way that you can remove a corner from a cube, twist it, and then put it back. A person (or, in the case of some of my cubes, a dust bunny) living in the world of a cube could calculate the patterns that could be made from a cube with a twisted corner without ever having the means to construct a cube with a twisted corner.

The reality of quarks has always been a bit iffy - do they exist, or do quarks merely provide a model that allows for some understanding/prediction? Which is why the use of the cube as a model for understanding quarks is quite ironic - the cube as model of a model.

With speed to burn.