Locally Localized Gravity, or If I Only Had a Brane 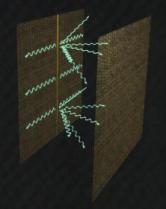 The Institute of Contemporary Art (ICA), at the University of Pennsylvania will be running a very interesting show titled Locally Localized Gravity from January 20 - March 25, 2007. From the ICA website description:

Locally Localized Gravity responds to an alternative mode of art making wherein artists produce events, run collectives and galleries, publish zines and small artist's books—generally acting as catalysts in their communities. In other words, they rarely focus only on traditional object-based practices. The exhibition, which will include over 100 artists, musicians, designers, lecturers, performers, and creators from Philadelphia and other cities, will be one non-stop event and on view in ICA's first floor galleries and terrace. ... The title is borrowed from string theory, a complex scientific term describing four-dimensional gravity (three dimensions of space and one of time). It was suggested to the curators by artist Matthew Ritchie, whose own work explores ideas of string theory, among many things. The term locally localized gravity can be applied to art scenes where artists, by generating a huge amount of energy, can create centers of gravity.

This description of the meaning of LLG is maximally condensed for public consumption. It is not the point of the exhibit, nor the role of ICA to give a detailed explanation. However, because I have participated in an ICA event in the past, I was asked to send them a more detailed blurb on locally localized gravity. While my piece might not make the ICA material, I am posting my submission here because LLG touches on the most extreme questions one can ask of any physical model, namely what is the ultimate nature of the universe?

LLG is a potentially viable theory that may answer one of the most fundamental metaphysical questions about the nature of the universe. Specifically, why do we live in 3-dimensions of space and 1 of time? Although this question might appear to be as unanswerable as "why is a ball round", for years physicists have struggled to reconcile some odd predictions that have come out of attempts to unify gravity and the other three forces that make up the totality of interactions in the observable universe . These predictions call for anything from 5-dimensions up through 26-dimensions. Debates about these theories have a how-many-angels-fit-on-the-head-of-a-pin type quality, but really the ultimate response has been: OK, we'll accept some number of extra dimensions because our theories call for them. Just where in @#$^ are they? Here's where branes come in. Branes are basically membranes that exist in higher-dimension worlds. For example, the surface of a balloon is a 2-dimensional membrane that happens to take on its balloon quality only in a 3-dimensional world. One explanation of the dimension problem is then that the universe that we experience is really a 3+1 (space + time)- dimensioned brane in a larger universe of much higher dimensions. We don't see the extra dimensions because we are literally trapped on our brane (and some would argue trapped in our vision by our brain.) Most do not feel that this is a satisfactory answer to why we see only 3 spatial dimensions. Just what is so special about 3+1 dimensions? A possible answer to this question is one that marries theoretical branes and gravitational brawn. Because of strange quirks with gravity, gravity does not exist on a brane. Instead it sort of "leaks" around branes, and as a result is pretty weak in our brane, but it can be very strong outside our brane. The idea of locally localized gravity is that this intense gravity can cause our brane to look 3-dimensional, even though space has a much higher dimension. Theoretical physicists have already shown that this theory is mathematically viable - they find that either 3- or 7-dimensional branes are the most likely given the assumptions they make for the effect due to the gravity "local" to the brane. This suggests that inhabitants in other parts of the universe might experience other dimensions. (With future advances in space travel, the extra dimensions would make such a location a potentially fantastic vacation resort!)

Given the complexity of these ideas (and their associated very scary mathematics), it is natural to wonder whether the brane-eyed model really provides a deep understanding of the nature of our universe.

I am not qualified to answer this - I barely know anything more about string theory other than what has made it into the popular media. To try to understand string theory enough to understand the brane view of the universe may be possible for me, but not without an extraordinary amount of time and effort.

Because of this lack of understanding on my part, and even though I should know better, I tend to think of all of this brane stuff and hyper-dimensional space as mathematical constructs first - cherished for their mathematically beauty. i.e. I am skeptical about the brane-view of the universe because of my inadequate background in string theory.

This is unfair, I know. But isn’t this what happens with most scientific models and theories that are publicized in some way? It’s not surprising that there are many skeptics - and it’s not really because scientists are not trusted as much as they used to be. Instead, it’s because the skeptics don’t have the background and conceptual framework needed to understand where the understanding comes from.

This reflection raises an interesting question, then: if a model is only understandable to a very few, how can it ever have a chance of becoming accepted scientific fact, law, or worldview? I am on dangerous ground here, uncomfortably close to implying that theories are more socially constructed than they are the true facts about the universe.

I don’t see anyway out of this argument though - without a society of "understanders", a theory or model is bankrupt.

Brane or no-brane, I can’t get outside of Plato’s Cave on this one, so I’ll remain in my select corner of the universe, glad that whatever accounts for gravity in my neck of the woods is still working in all dimensions.

For more info on the dimensionality question and LLG, check out Why do we live in 3+1 dimensions?, a summary + set of links describing these wild ideas on the Backreaction blog of Sabine Hossenfelder and Stefan Scherer, theoretical physicists and also wife and husband Their blog, described as Events on the world lines of two theoretical physicists, from the horizon to timelike infinity. A scientifically minded blog with varying amounts of entertainment, distractions, and every day trivialities, is definitely worth a deeper investigation than just this article.

And how does all this connect with art and artists? You’ll just have to check out the ICA show.