M.C. Escher: Chaos and Order and Back Again

Order and Chaos. Click to enlarge.
In an earlier post I commented on the ability of M.C. Escher to capture the infinity of time and space in his woodcuts, drawings, and lithographs.

Another common thread in many of Escher’s works is the sense of order arising out of chaos - or is it chaos out of order? A master of graphic puns that simultaneously emphasize and blur the demarcation between figure and ground, Escher does seem to lean more in the direction of order out of chaos. In The Magic of M.C. Escher , a fabulous compendium of Escher’s works that includes unpublished sketches from his workbooks and excerpts from his correspondence with family and colleagues, this direction is clear:

The consistency of the phenomena around us, order, regularity, cyclical repetitions and renewals, have started to speak to me more and more strongly all the time. The awareness of their presence brings me repose and gives me support. In my pictures I try to bear witness that we are living in a beautiful, ordered world, and not in a chaos without standards, as it sometimes seems.

For a very good intro to a broad selection of Escher’s most famous works, visit the M.C. Escher - Life and Work on-line tour at the National Gallery of Art. From the program notes for the Order and Chaos lithograph pictured in this post:

Escher described this print as a symbol of order and chaos: order represented by the polyhedron and the translucent sphere; chaos depicted by the surrounding broken and crumpled cast-off objects of daily life. The artist believed the polyhedron (a solid figure with many sides) symbolized beauty, order, and harmony in the universe. Yet, he rendered chaos with equal care, as in the exquisitely drawn sardine can at upper left.

But was Escher so one-sided, or should I say unidirectional in his rendering of order and chaos? Consider Development I - an early woodcut dating from 1937. From the National Gallery of Art notes:

This is one of Escher’s earliest prints to demonstrate his theory of the regular division of the plane," which he described as follows: "A plane, which should be considered limitless on all sides, can be filled with or divided into similar geometric figures that border each other on all sides without leaving any empty spaces. This can be carried on to infinity according to a limited number of systems." 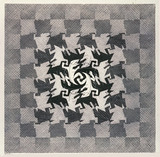 Development I. Click to enlarge.
Even if his original motivation for this woodcut was more an exercise in the geometry of dividing space, I can’t help but see Development I as the lizard figures in the middle, frozen lock-stepped in a chaotic dance arising out of the ordered regularity of the chessboard at the edges of the woodcut. The light shading of the chessboard border is what gives me this impression, probably because the figure/ground resolution of the lizards/chessboard is not ambiguous. (Although it must be pointed out that Escher’s works rarely succeed on one visual puzzle alone. In Development I the figure/ground resolution of the white and black lizards is itself highly ambiguous.)

Or maybe Escher had a more ambiguous view of the order-chaos continuum, one that could incorporate a symmetry in the paths that could be taken. Which brings me to Reptiles, his 1943 lithograph. (This image was my initial introduction to Escher - a colorized Reptiles was used as the cover of the inaugural Mott the Hoople album, which I first listened to in 1969.) In Reptiles the lizards emerge from the ordered 2-Dimensional world of the journal page to venture out into the 3-D world, marching around desktop items snorting smoke out of their snouts. After a brief foray into this 3-D world of freedom, they reenter the 2-D page.

So have the lizards learned their lesson? Is the chaotic world of 3-D too much for the paper lizards? Or do they never learn, repeating the same procession from order-to-chaos-to-order forever? (Note that I could just as well have written chaos-order-chaos-order. There is no designated starting point here.)

Escher’s image is wonderful in its implied motion. The action in Reptiles suggests an ongoing infinite process as the reptiles leave, then re-enter 2-D. But this endless loop then suggests that the lizards are moving in the 2-D world of the journal page. As he does so often, Escher again depicts the infinity of time in a way that is impossibly clever, meaningful, orderly and chaotic.