Me Data? No, You Data 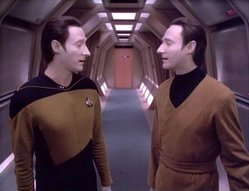 In The Bush Tragedy, a recently published, depressing view of the Bush presidency, author Jacob Weisberg writes that

Bush thought examining evidence was beneath him. 'The President of the United States is not a fact checker,' as one aide put it...

A flashback of "I’m a uniter, not a divider" was clanging around my brain pan , morphing into "I’m a decider, not a diviner" as I read and tried to assimilate this. It’s one thing to have difficulty seeing the logical connection between a large amount of disparate experiments and a complex argument such as occurs when considering climate change. It’s quite another thing to act as if the data doesn’t exist - a truly irrational, scary denial for any POTUS.

In a more- than -chance occurrence, just around the same time that TBT was released, the American Geophysical Union (AGU) issued a position statement titled Human Impacts on Climate , which begins

The Earth's climate is now clearly out of balance and is warming. Many components of the climate system—including the temperatures of the atmosphere, land and ocean, the extent of sea ice and mountain glaciers, the sea level, the distribution of precipitation, and the length of seasons—are now changing at rates and in patterns that are not natural and are best explained by the increased atmospheric abundances of greenhouse gases and aerosols generated by human activity during the 20th century.

The position statement doesn’t say much more than what has already been said by the IPCC, but it is nice and concise. The opening statement is particularly strong: the climate is "now clearly out of balance and is warming." Now this may be clear to 43. If so, it’s apparently not based on data.

Given the dire consequences of the AGU statement, their call to action is rather tepid. But they have given themselves an impossible task. Can you spot it?

With climate change, as with ozone depletion, the human footprint on Earth is apparent. The cause of disruptive climate change, unlike ozone depletion, is tied to energy use and runs through modern society. Solutions will necessarily involve all aspects of society. Mitigation strategies and adaptation responses will call for collaborations across science, technology, industry, and government. Members of the AGU, as part of the scientific community, collectively have special responsibilities: to pursue research needed to understand it; to educate the public on the causes, risks, and hazards; and to communicate clearly and objectively with those who can implement policies to shape future climate.

No doubt the AGU members are well-suited for most of their "special responsibilities." Research and education is not a problem. However, communicating "clearly and objectively with those who can implement policies to shape future climate" is a major problem when what needs to be communicated - namely data and their interpretation - is not a theme that resonates with the - the "implementer, not the reasoner."

What’s most galling about this disdain for data, and ultimately the models that live and breathe because of this data, is that the behavior is a beacon for others with pretty sharp political axes (I’ll avoid any reference to "pretty dull reasoning skills"), So it’s not very surprising that the AGU statement has touched off a fire storm by those who claim that "warmists" are at it again, fanning the flames of hysteria. These anti-warmists all have something in common with POTUS - they tend to discount facts. (See the responses to news about the AGU release here.)

No objective look at the data produced by the National Snow and Ice Data Center (NSIDC), which has accumulated vast amounts of data of the Greenland ice cap and many other regions, will fail to convince someone that climate change is progressing in a way that is definitely "not natural." (The NSIDC animations of sea ice changes are truly convincing.)

Note that I wrote "objective look," so forget the NSIDC data and AGU statements. When faced with data, the anti-warmists (coolists?) fall back on a few hoary ripostes: we’re only looking at a 100 years of data, Greenland used to have much less ice, etc. Many don’t even acknowledge that rapid climate change, regardless of what is causing it , is catastrophic. More dangerous, many don’t agree to a correlation between mankind’s emissions and the observed climate change being so carefully observed (of which the loss in sea ice is the most compelling.) The responses to the AGU statements are so angry, so vituperative, so ad hominem, it’s easy to believe that they will refuse all data because it’s not what they want to hear.

And they’ll be backed up the data-discarder-in-chief. Models, it all comes down to models. Where is the acknowledgment by the anti-warmists that most climate models are fairly predictive, and most claim catastrophe if the level of greenhouse gases increase? With a government oblivious to facts and their consequences, the models might as well be discarded in the dustbin of history, which is where we may all be heading.