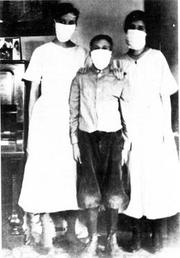 Spanish Flu in SpokaneModeling how a disease progresses in a pandemic, and the related modeling of the effects of different strategies on stopping the pandemic, are, perhaps next to nuclear attack modeling, some of the most sensitive mathematics being done today.

Consider the difficulties of determining pandemic-containment strategies by looking to past pandemics.

Efforts of several cities to halt the spread of the 1918 Spanish flu have now been analyzed and modeled by several research teams. One technique that appears promising is "social distancing" - referred to as a non-pharmaceutical intervention (NPI) - a fairly obvious strategy of reducing the potential contact between members of the community by closing schools, churches, stores, etc.

I wrote "fairly obvious" - but is it? There are so many contingencies that affected each city that it is hard to draw conclusions. Consider the report of the studies as described by Maryn McKenna of the Center for Infectious Disease Research & Policy at U. Minnesota

But while NPIs make intuitive sense, actual evidence for their ability to block or slow flu transmission has been limited. An Institute of Medicine report released last December concluded that the measures might help in a pandemic but should not be oversold. "It is almost impossible to say that any of the community interventions have been proven ineffective," the report said. "However, it is also almost impossible to say that the interventions, either individually or in combination, will be effective in mitigating an influenza pandemic." The Lipsitch article, coauthored by Richard J. Hatchett, MD, of the National Institutes of Health, and Carter Mecher, MD, of the Department of Veterans Affairs, analyzes the effect of 19 types of NPIs used in 17 US cities during the fall phase of the 1918 pandemic. The authors found that certain types of NPIs, notably school, church, and theatre closings, were more effective than others, and that cities that imposed NPIs early in the epidemic had peak weekly death rates about 50% lower than those of cities that imposed NPIs later or not at all. But, they found, cities that were able to reduce their rates of illness and death during the onset of the pandemic were at greater risk of experiencing a greater second wave of illness and death once restrictions were relaxed. That finding is also supported by Ferguson's paper, coauthored with Martin C.J. Bootsma of Utrecht University, which applies a mathematical model to data from 16 cities where both the start date and the end date for NPIs are known. Cities that enacted NPIs early were able to reduce transmission by up to 50% compared with cities that introduced such measures later in their local epidemics. However, the total mortality declined much less than that—from 10% to 30% in the most successful cities—because the interventions blocked transmission so effectively that many residents were still vulnerable to the virus once the controls were lifted. Few cities maintained distancing measures more than 6 weeks, according to the Lipsitch study.

Note that the susceptibility to the 2nd wave of disease is claimed to be due to the lack of exposure during the first wave. i.e. it must be assumed that those infected in Round 2 would have been either (a) no longer susceptible because of the immunity developed upon the first exposure, or (b) sick in Round 1, and possibly dead.

Indeed, some see the NPI as delaying the inevitable - but nevertheless a procedure that yields precious time:

"The major benefit of delaying transmission is to buy time to develop a vaccine," said Marc Lipsitch, D.Phil., a professor of epidemiology at Harvard School of Public Health and a coauthor of the second paper. "Anything else is just delay."

There are other factors at work - mutation between Rounds 1 and 2, e.g.

The intriguing, and important aspect of the studies is the care with which results and predictions must be made - a knowledge of social interaction and virus mutation must both be taken into account when determining the efficacy of past pandemic strategies, and the likelihood of success for similar strategies in future pandemics.

The above image is by Courtesy Kenneth Knoll of The Pacific Northwesterner. The photo appears in The Spanish Flu in Spokane at HistoryLink.org - The Online Encyclopedia of Washington State History.