Modeling The Universe: The History of Cosmology 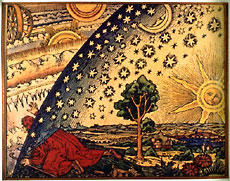 So much of the history of mathematics and science is encapsulated in the study of the heavens. One can argue that the first modeling may have been early views of the universe, and the planets riding on their celestial spheres in a cascade of epicycles. The American Institute of Physics has set up a wonderful site devoted to the history of cosmology that is a terrific resource for learning more about these models, and how our ideas of the solar system and universe have matured.

For good reason, the site devotes ample space to Harlow Shapley, whose pioneering work in 1916 on globular clusters and the real size of the heavens exploded our view of the universe and caused us to reappraise our position in it. Shapley write eloquently about how his discoveries, and the work of all of those before him, have necessarily changed our position as observers within the physical universe, and hence the way we model the universe and ourselves:

The physical universe was anthropocentric to primitive man. At a subsequent stage of intellectual progress it was centered in a restricted area on the surface of the earth. Still later, Ptolemy and his school, the universe was geocentric; but since the time of Copernicus the Sun, as the dominating body of the solar system, has been considered to be at or near the center of the stellar realm. With the origin of each of these successive conceptions, the system of stars has ever appeared larger than was thought before. Thus the significance of man and the earth in the sidereal scheme has dwindled with advancing knowledge of the physical world, and our conception of the dimensions of the discernible stellar universe has progressively changed.

See the Cosmology site for much more.