Niels Bohr To Be Played by James Gandolfini 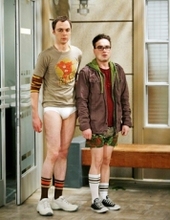 Niels and Werner in HBO’s new QMechI always knew that, even if one couldn’t get a job doing physics in a lab or university, at least you’d be able to do anything else on the planet, and do it well.

So it’s great to know that Hollywood continues to lure physicists, albeit only two so far (that I know of).

I used to think that the best physics job was that held by Andre Bormanis, who served as the science consultant for Star Trek for many years. While recognizing his envied stature, he does seem nonplussed by the incongruity of his role, remarking that " Like physics, storytelling involves problem solving, formulating hypotheses, exploring unexpected connections between phenomena, and seeking a solution"

Now there is Big Bang Theory … the wacky new sit-com from CBS. The nano:

Meet two brainiacs with a lot to learn. Leonard and Sheldon can tell their quarks from their quantum physics, but have no clue how women add up. Leave it to their pretty new neighbor, just off a messy breakup, to teach them a thing or two.

Obviously this scenario is much more intractable than formulating hypotheses and exploring unexpected connections between phenomena. Luckily, there is a physics consultant for the show from UCLA, although he/she is as yet unidentified.

Wolfgang Pauli Walnuts illustrates the "operator" method of solving Schroedinger’s EquationSo what’s next? Clearly HBO has to get into the act and create a series titled The Quantum Mechanics. The high concept here is that QMech (the logo that will adorn all the associated merchandise) is the prequel to Michael Frayn’s surprisingly successful play Copenhagen. This one-hour weekly drama will be a no-holds barred look at Niels Bohr, Werner Heisenberg, and the Sopranos-like rule they held over the physics world between the world wars. Much of the action will take place at the Niels Bohr Institute, the Copenhagen version of Satriale’s Pork Store.

Niels and Werner and their proteges live their lives in strict obedience to their version of omerta: The Copenhagen Interpretation of Quantum Mechanics.

One major arc in Season 3 will be the aborted attempt of underboss Wolfgang Pauli Walnuts to establish his own harsh code of conduct: the Pauli Exclusion Thing, where no more than two physicists are ever allowed in a closed room, or permitted to be co-authors on a paper.

In a brilliant cross-linking similar to the finale of the Bob Newhart show, the Heisenberg Uncertainty Principle is used to explain the final episode of The Sopranos.

Where do I sign up to be a script consultant?