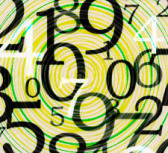 The fundamental constants (e.g. the mass of the electron, the universal gravitation constant, Planck’s constant) are given that name for good reason: all computations used to understand or model the physical universe rely on their values.In addition to the fundamental constants, there are other constants that define our universe. These numbers are really the statistics of the world, e.g. the heights of mountains, lengths of rivers, masses of the planets, etc.There is a very odd, hard-to-believe-at-first- sight mathematical law that describes the distribution of these constants. In 1938, Frank Benford analyzed over 20,000 numbers taken from the fundamental constants of physics and far-removed areas such as sports stats and street addresses. Benford wanted to measure the frequency distribution of the starting digits for these numbers because of another odd fact - in antique tables of logarithms, the first few pages are often more worn, indicating that the log user was thumbing through the first pages much more frequently than latter pages, i.e. the logs with a "1" as a leading digit.Now here’s the amazing part. Instead of determining that starting digits from 1-9 appeared with approximately the same frequency, Benford found that the numbers he was studying began with a "1" a disproportionate 30% of the time. Benford went further, measuring the entire frequency distribution of starting digits, and developed a formula that predicts this distribution - a formula known as Benford’s Law. The Law predicts that the frequency of occurrence of a digit drops off logarithmically with increasing digit size, and therefore numbers starting with 9 appear less frequently than all other numbers .The explanation for the law comes from the fact that the numbers analyzed have units, and the important fact that the law is independent of the system of units. For a mathematical derivation of Benford’s Law based on this scalability between units, click here. (And for a Java simulation, click here.) Benford’s Law holds true in a surprising number of situations, and has been described as showing that "natural processes can be remarkably resistant to complete randomness. "What we have here is a nice example of a different type of universality. Where Feigenbaum showed that all functions of a certain type behaved in the same quantitative way, Benford has found that all fundamental and statistical constants follow the same frequency distribution.So we live, apparently, in a universe that only parcels out numbers in a certain way. Even though there are an infinite number of numbers (and, according to Cantor, an infinite number of different size infinities of numbers), this fact seems terribly limiting. Which is why I was happy to come across a fascinating site called The Secret Life of Numbers, a site that describes a very interesting project: what are the most popular integers?Sort of like an American Idol for numbers, the authors designed software that worked in concert with search engines to find the popularity ranking of every integer between 0 and 1 million.OK. A strange project. Why did they do it?

The resulting information exhibits an extraordinary variety of patterns which reflect and refract our culture, our minds, and our bodies.For example, certain numbers, such as 212, 486, 911, 1040, 1492, 1776, 68040, or 90210, occur more frequently than their neighbors because they are used to denominate the phone numbers, tax forms, computer chips, famous dates, or television programs that figure prominently in our culture. Regular periodicities in the data, located at multiples and powers of ten, mirror our cognitive preference for round numbers in our biologically-driven base-10 numbering system. Certain numbers, such as 12345 or 8888, appear to be more popular simply because they are easier to remember.Humanity’s fascination with numbers is ancient and complex. Our present relationship with numbers reveals both a highly developed tool and a highly developed user, working together to measure, create, and predict both ourselves and the world around us. But like every symbiotic couple, the tool we would like to believe is separate from us (and thus objective) is actually an intricate reflection of our thoughts, interests, and capabilities. One intriguing result of this symbiosis is that the numeric system we use to describe patterns, is actually used in a patterned fashion to describe. We surmise that our dataset is a numericsnapshott of the collective consciousness. Herein we return our analyses to the public in the form of an interactive visualization, whose aim is to provoke awareness of one’s own numeric manifestations. 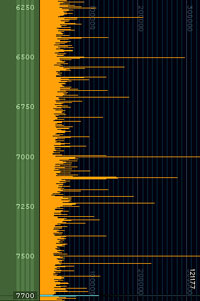 The applet at the Secret Lives of Numbers Site is beautiful to use: you can select broad ranges of numbers with the mouse, zooming in and out at will The displays are dynamic, and it’s probably no surprise by now that the pattern of peaks is fractal-like (see the image on the left). As you zoom in on a smaller range you will get a very self-similar distribution.When you click on a peak in the frequency distribution corresponding to a "popular" number, an info screen presents the important stuff: the number’s ranking, and the reasons for its popularity. For example, in the chart on the left, the 7500 peak is characterized by a ranking of 1196/100K, which puts it in the 98.8th percentile. The reasons for number’s monster performance? 7500 appears as a model number for a number of different items (and manufacturers): Motorola 7500, hp7500, Dell Inspiron 7500…So break free from Benford’s Law and try out the Secret Life of Numbers .Check your birthdate, your address, your telephone number, and become aware of your "numeric manifestation."