On the Mathematical Nature of the World 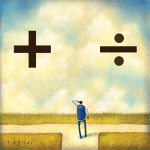 I had one of those very rewarding teaching moments yesterday in my General Physics lab. Some students and I got into a discussion of just what is physics, what is the connection between mathematics and physics, and whether the world is itself mathematical.

The nature of the world as mathematical is a common theme in the Chaos and Fractals course. I have developed a seminar module that has one main reading, and I keep finding supplemental readings every time I teach the course. I list a few of these here in order to collect them in one place - for future renditions of the course, andas a post that will hopefully generate some debate from interested readers.

The main reading is John Barrow’s The Mathematical Universein which he poses the question "The orderliness of nature can be expressed mathematically. Why?" This articleis an excellent summary of the main schools of mathematical philosophy - realism, inventionism, formalism, and constructivism.

Anyone interested indeeper views of mathematical realismmust read The Unreasonable Effectiveness of Mathematics in the Natural Sciences. This 1960 article by Eugene Wigner isdefinitely the "mother-of-all mathematics and the world"arguments for realism. In it he describesthe uncanny connection between mathematics developed as part of pure, formal, abstract systems and physical observation, which naturally leads to ontological questions on themathematical nature of the world:

The first point is that mathematical concepts turn up in entirely unexpected connections. Moreover, they often permit an unexpectedly close and accurate description of the phenomena in these connections. Secondly, just because of this circumstance, and because we do not understand the reasons of their usefulness, we cannot know whether a theory formulated in terms of mathematical concepts is uniquely appropriate.

A recent article by 2004 Physics Nobel LaureateFrank Wilczek in the Nov. 2006 issue of Physics Today is a provocative new look at Wigner’s thesis. Titled "Reasonably effective: I. Deconstructing a miracle", Wilczek attempts to show that the effectiveness of mathematics is not unreasonable. Using arguments of symmetry and locality, Wilczek ultimatelyfinds that there is a deep reason for mathematical effectiveness:

When people like Archimedes, Johannes Kepler, and Galileo discovered the earliest "unreasonably effective" mathematical laws of nature, each such law seemed like a newly revealed miracle, unanticipated and logically disconnected from the others. After traversing a long history, we can now look back to see the same laws in quite a different way, as particular consequences of a more profound and encompassing theoretical framework in which symmetry and locality emerge as dominant features of the world's deep structure. Having found those dominant features, we've uncovered the underlying reasons why mathematics is so effective in describing nature (that is, when it is!).

Wilczek makes some very strong claims - some of which are way beyond my ability to understand and comment on. Yet his enthusiasm for the program of physics is palpable. He foresees future experiments that will show even more the mathematical nature of the world as phenomena predicted by physics theories that fully incorporate symmetry and locality are found:

Eventual discovery of any or—as I expect—all of these new phenomena will be wonderful new confirmation of the effectiveness of mathematics in natural science. But those discoveries will constitute the pinnacle of reason, not an "unreasonable" anomaly.