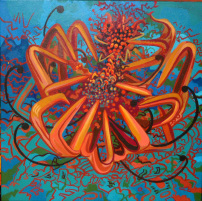 Philadelphia-area artist Paul Santoleri draws/paints amazing images that are evocative of fractals. Not the Mandelbrot-class fractals that are the staple of most fractalologists and fractal software, butreminiscent of the fiendishly delicate and organic-looking fractals created by Clifford Pickover.

Only Pickover does his with a computer, while Santoleri paints his. The image at the top of this post is titled Red Spider, and is a 2’ by 2’ painting using acrylic on canvas. (Santoleri also paints on a very large scale: he is also a muralist, and has done 70+ large murals around the world, with a few in Philadelphia.

While Pickover has done an enormous amount of spreading the fractal word, and has been a great spokesman for the melding of art and mathematics, I find Santoleri’s work much more interesting because its organic-like nature is truly evident, paintedwithout any dependence on computers. In Santoleri’s own words:

In my works I erase the borders between the visible and invisible matter and create a new medium generating object and beings whose meaning, gender, and whereabouts is unclear and not important. My works should be viewed just as a part of the moving beyond their bounds whole that knows no spatial or temporal limitations.

Pickover certainly captures an artistic view of infinity with his images, but they are more of space alone and can’t compete with Santoleri’s temporal infinity.