In the annals of how-to songs one will find everything from delicate interactions with a weapon of mass destruction - e.g. How to Dismantle an Atomic Bomb by U2 - to an even more dangerous and potentially deadly situation - How to Handle a Woman from Camelot comes to mind.

(Yes I know that How to Dismantle an Atomic Bomb is not the name of an actual song! So suggest a better title to match up with How to handle a Woman.)

And now comes the ultimate how-to for the fractally-minded: Mandelbrot Set by Jonathan Coulton, the Contributing Troubadour for Popular Science Magazine and composer of "well-crafted geek folk-pop. Hilarious but heartbreaking songs about mad scientists, robot armies and self-loathing giant squids." His is the voice of "every one of us who has ever sat despairingly on the floor, surrounded by parts of an Ikea endtable, weeping over our Allen wrenches.

Coulton’s work is truly unique. Check out his site for all of his tunes. And there are plenty of them: In 2005-2006 he recorded and published a new song podcast every week. All of the lyrics are there, as well as guitar tabs and videos.

Pathological monsters! cried the terrified mathematician Every one of them is a splinter in my eye I hate the Peano Space and the Koch Curve I fear the Cantor Ternary Set And the Sierpinski Gasket makes me want to cry And a million miles away a butterfly flapped its wings On a cold November day a man named Benoit Mandelbrot was born His disdain for pure mathematics and his unique geometrical insights Left him well equipped to face those demons down He saw that infinite complexity could be described by simple rules He used his giant brain to turn the game around And he looked below the storm and saw a vision in his head A bulbous pointy form He picked his pencil up and he wrote his secret down 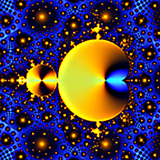 Then there’s That Spells DNA, a song that should be the theme song of the Human Genome Project…

If you are inclined to pick up a guitar and try out Mandelbrot Set on your own, be sure to follow the Guitar Tab notes exactly:

Achieve musical and mathematical enlightenment at the same time by spending some time with Coulton. Whether it’s Tom Cruise Crazy, Furry Old Lobster, or The Town Crotch, Coulton is one bad*ss f*****g troubador!