Prescience and Spice and Everything Nice 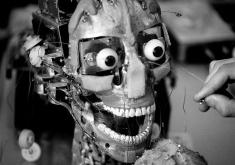 There is prediction, and there is prognostication. And, once in a great while, there is true prescience.

Consider the case of J.C.R. Licklider - a seminal figure of whom, until recently, I had never heard. On reading about him, I am staggered by his dead-on prescience in predicting the ultimate power of social connections via the internet - back in 1960. His Man-Computer Symbiosis has to be read to be believed. In it he touches on the obvious: the need for speed, memory, robust programming languages, and effective I/O. But he goes much deeper, brilliantly identifying memory and its organization (which leads to necessary "searchability") as necessary developments before the symbiosis can happen:

Man-computer symbiosis is an expected development in cooperative interaction between men and electronic computers. It will involve very close coupling between the human and the electronic members of the partnership. The main aims are 1) to let computers facilitate formulative thinking as they now facilitate the solution of formulated problems, and 2) to enable men and computers to cooperate in making decisions and controlling complex situations without inflexible dependence on predetermined programs...Prerequisites for the achievement of the effective, cooperative association include developments in computer time sharing, in memory components, in memory organization, in programming languages, and in input and output equipment.

And note the reference to emergent behavior: to enable men and computers to cooperate in making decisions and controlling complex situations without inflexible dependence on predetermined programs.

Man-Computer Symbiosis reminds me of one of my favorite sci-fi books, although pigeonholing it into that genre doesn’t do justice to Last and First Men: A Story of the Near and Far Future, by Olaf Stapledon. Here Stapledon predicts the fate of mankind from Stapledon’s present (1930) through the next two billion years, during which mankind evolves through 18 distinct human species First Men, Second Men, etc. Each of these species are truly different breeds of cats. Third Men, e.g., used their ears for bragging rights, had six steel fingers on each hand and were "deeply interested in music and in the design of living organisms." And how about those Sixth Men? "Sadly reduced in stature and in brain, these abject beings… gained a precarious livelihood by grubbing roots upon the forest-clad islands, trapping the innumerable birds, and catching fish… Not infrequently they devoured, or were devoured by, their seal-like relatives."

(Note: I didn’t read First and Last Men until I was 30. While reading it I was reminded of a song that was released near my 16th birthday, and which I still consider to be one of the Top 10 Worst Songs ever to become a #1-hit on AM Radio: In the Year 2525 (Exordium & Terminus) by Zagar and Evans. Now that I think about it, I wonder whether Z&E themselves were inspired by Stapledon. Maybe they are really Sixth Men who have not yet been devoured by their seal-like relatives. Check the video. I don’t know - I think that I can see six steel fingers on Zagar’s left hand.)

But back to Licklider. I used the term prescience to suggest something more than just prediction. There is a mystical quality to one who has prescience; the person sees/knows the future, hence the pre-science.

And there’s another literary connection here. Paul Muad’Dib of Dune becomes prescient when he ingests melange - the spice of Dune.

And Licklider did it without the prescience-enhancing-spice.