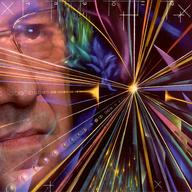 This past march, Michal Heller was awarded the 2008 Templeton Prize, an honor that groups him with other prize winners as "entrepreneurs of the spirit"— defined by John Templeton as outstanding individuals who have devoted their talents to those aspects of human experience that, even in an age of astonishing scientific advance, remain beyond the reach of scientific explanation. (more)

I have written before about past winners, and of research sponsored by the Templeton Foundation. Yet I have not found explicit writing that attempts to join together the separate strands of science and the divine through the prism of chaos until I read some of Heller’s works. This may be because of his very obvious dual hats: Heller is both a cosmologist and Catholic priest, who managed to thrive in communist Poland.

Heller is really interested in the ultimate beginnings of everything. His work and speculation must necessarily include theology because his target is the start of everything before there was a Start to Everything:

Various processes in the universe can be displayed as a succession of states in such a way that the preceding state is a cause of the succeeding one… (and) there is always a dynamical law prescribing how one state should generate another state. But dynamical laws are expressed in the form of mathematical equations, and if we ask about the cause of the universe we should ask about a cause of mathematical laws. By doing so we are back in the Great Blueprint of God's thinking the universe, the question on ultimate causality…: "Why is there something rather than nothing?" When asking this question, we are not asking about a cause like all other causes. We are asking about the root of all possible causes.

For a rich and very complex view of this root of all possible causes, read Chaos, Probability, and The Comprehensibility of the World. Here Heller takes on Einstein’s famous quote that the "eternal mystery of the world is its comprehensibility," searching for the causes of what Eugene Wigner referred to as the “the unreasonable effectiveness of mathematics in the natural sciences.”

In a unique analysis, Heller’s attempts at explanation rely on a crucial, and surprising player: probability theory. He goes so far as to argue for an ontological status of probability, strongly suggesting that "the time-honored antinomy between lawfulness and probability should be reconsidered."

What then is the role of God in such a world For Heller, this is the wrong question. It should be the role of probability for God:

The shift we have sketched in our views on the significance of probability has had its impact on modern natural theology. Randomness is no longer perceived as a competitor of God, but rather as a powerful tool in God’s strategy of creating the world.

A simple reading of Heller might suggest that he is merely echoing the claims by those who find a way to reconcile biological evolution with the existence of a creator. But this would be a very shallow readying, because Heller takes the more radical view that randomness is, in fact, a necessary condition for life. This is where chaos theory comes into play

Recent developments in deterministic chaos theory have shown that this is also true as far as the macroscopic world is concerned. (Note: Here Heller is referring to the now mostly accepted view of the probabilistic nature of atomic phenomena) An instability of the initial conditions leads to unpredictable behavior at later times, and there are strong reasons to believe that a certain amount of such a randomness is indispensable for the emergence and evolution of organized structures.

Ultimately, Templeton does not answer Einstein’s question. He has broadened it, really, because of his joining of cosmic and chaotic processes. Now Einstein’s search for the why of comprehensibility must necessarily include chaos.

With Heller’s prize, the Templeton Group has promoted the ideas and writings of another spectacularly gifted scientist and humanist, one who has devoted their talents to those aspects of human experience that, even in an age of astonishing scientific advance, remain beyond the reach of scientific explanation.

Note: The ℑ of M. Heller at the top of this post is by Andrzeja Dudzińskiego