The ultimate in modeling occurs when a simulation of physical events is so real that reality pales in comparision.

Consider, for example, the case of the University of Iowa Farm Music Machine, as described in a recent e-mail making the rounds: 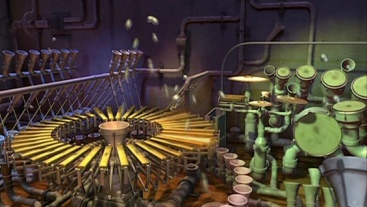 This incredible machine was built as a collaborative effort between the Robert M. Trammell Music Conservatory and the Sharon Wick School of Engineering at the University of Iowa. Amazingly, 97% of the machines Components came from John Deere Industries and Irrigation Equipment of Bancroft Iowa, yes farm equipment! It took the team a combined 13,029 hours of set-up, alignment, calibration, and tuning before filming this video but as you can see it was WELL worth the effort. It is now on display in the Matthew Gerhard Alumni Hall at the University and is already slated to be donated to the Smithsonian.

If you haven’t seen/heard this device, check out the video. (Note - this is a wmv file. If your media player can’t play it, try viewing the film at any one of hundreds of websites, e.g. digg)

While this is an amazing video, the Farm Music Machine is obviously not true - it is a brilliant computer animation produced by Animusic titled Pipe Dream. The e-mail describing the FMM may just be the most benign, and popular urban legend listed on Snopes.

In addition to the impossible-to-imagine precision needed to set up such a device, the giveaway is the speed with which the balls fly out of the pipes, follow a parabolic arch, and then land on the drumheads and keys. The rapidity of the notes generated by the balls hitting the keys is much faster than gravity would allow.

It is still fun to watch, though. As a piece of animation, it is brilliantly executed. The fact that it appears real enough to have become an urban legend is testament to the fact that the creators of the film are modeling the physics of the machine close enough to reality that the existence of the machine is almost believable.

Pay careful attention to the above-mentioned parabolic trajectories, or the way the balls bounce off of the mini drumheads. The motion of each of these balls is calculated by using the basic 2-D kinematics of projectile motion typically covered in the first semester of a General Physics course. If this hadn’t been done, the illusion would not have fooled anybody because of our individual experiences watching real projectiles.

It is interesting to note that, before Galileo, scientists believed that projectiles followed circular trajectories. This presents an interesting question - is it possible that 15th-century scientists would immediately see the Farm Machine as false because of their incorrect view of reality? That is, do simulations only fool those with correct views of reality?

Whatever the answer to this paradoxical situation, I am glad to be fooled - over and over. No matter how many times I watch the Fantastic Farm Machine video, I am suckered into believing that the machine does exist, and that the team did spend a "combined 13,029 hours of set-up, alignment, calibration, and tuning before filming this video."

Actually, it is possible to imagine the animators spending this much time to create the film!

For a thorough review of Animusic’s work, including audio and video quality, see DVDActive Reviews.