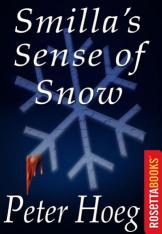 The quotes from G. H. Hardy in the previous post are well known - in mathematical circles at least. Their succinctness is a hallmark of Hardy’s desired economy of words in mathematical proofs.Hardy was a number-theorist, and it seems appropriate to follow up the posting of his quotes on the beauty of mathematics with a very interesting fictional passage about the nature of numbers, and the connection with human life.The following passage is from Smilla’s Sense of Snow, a 1992 novel by Danish author Peter Høeg. A strange mystery that involves a child’s murder and an eery trip to Greenland, Smilla is a fascinating heroine, at home in the worlds of mathematics, intrigue, and, obviously, snow…

Do you know what the foundation of mathematics is? … The foundation of mathematics is numbers. If anyone asked me what makes me truly happy, I would say: numbers. Snow and ice and numbers. And do you know why?Because the number system is like human life. First you have the natural numbers. The ones that are whole and positive. The numbers of a small child. But human consciousness expands. The child discovers a sense of longing, and do you know what the mathematical expression is for longing?The negative numbers. The formalization of the feeling that you are missing something.And human consciousness expands and grows even more, and the child discovers the in-between spaces. Between stones, between pieces of moss on the stones, between people. And between numbers. And do you know what that leads to? It leads to fractions. Whole numbers plus fractions produce rational numbers. And human consciousness doesn’t stop there. It wants to go beyond reason. It adds an operation as absurd as the extraction of roots. And produces irrational numbers.It’s a form of madness. Because the irrational numbers are infinite. They can’t be written down. They force human consciousness out beyond the limits. And by adding irrational numbers to rational numbers, you get real numbers.It doesn’t stop. It never stops. Because now, on the spot, we expand the real numbers with imaginary square roots of negative numbers. These are the numbers we can’t picture, numbers that normal human consciousness cannot comprehend. And when we add the imaginary numbers to the real numbers, we have the complex number system. The first number system in which it’s possible to explain satisfactorily the crystal formation of ice. It’s like a vast, open landscape. The horizons. You head towards them and they keep receding.

Greenland icecap. Photo by Evert Wesker.Luckily for all of us, the madness hasn’t stopped. The complex number system is essential to fractals, and forms the mathematical plasma in which algorithms for determining the Mandelbrot set are calculated. This set is like a vast, open landscape with horizons replaced by fractal basin boundaries. As you head towards them, they don’t recede. Rather, they get more complex. Without complex numbers, then, we’d be living in world bereft of color and self-similarity - an uninteresting world of snow. 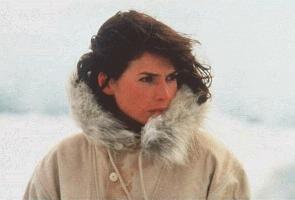 Notes - Thanks to Sharon Armstrong, of La Salle’s Psych department, for reminding me of Smilla’s mathematical musings…Julia Ormond played Smilla in the movie version. Click here for a film clip of the mathematics scene…And be sure to try this excellent fractal basin applet.