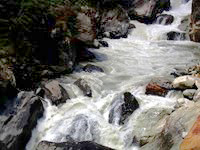 I recently began re-reading Sometimes a Great Notion, Ken Kesey’s monumental second novel published in 1964, and one of my favorite books. Even though I read it over 20 years ago, I still remember many of the most famous scenes. More remarkable, perhaps, is the fact that I vividly recall the haunting descriptions of the Pacific northwest so magically captured by Kesey.When I read about the chaotic aspects of turbulence, especially as described by James Gleick in Chaos: Making a New Science, I am always reminded of Great Notion’s opening passage:

Along the western slopes of the Oregon Coastal Range … come look: the hysterical crashing of tributaries as they merge into the Wakonda Auga River. … The first little washes flashing like thick rushing winds through sheep sorrel and clover, ghost fern and nettle, sheering, cutting … forming branches. Then, through bearberry and salmonberry, blueberry and blackberry, the branches crashing into creek, into streams. Finally, in the foothills, through tamarack and sugar pine, shittim bark and silver spruce – and the green and blue mosaic of Douglas fir – the actual river falls 500 feet … and look: opens out upon the fields.”

Many others feel the same way as I do about Great Notion. In a 1997 survey, the Seattle Post-Intelligencer published a list of the 12 Essential Northwest Books. Sometimes a Great Notion was #1, after being named the top book by over 1/3rd of the participants.

According to Kesey (who died in 2001), “I think ‘Sometimes a Great Notion’ is the best thing I’ll ever write…Writing it was much different from ‘Cuckoo’s Nest,’ which often seemed like filling in the blanks. ‘Notion,’ to my mind, is a great piece of work. People sometimes ask me why I don’t write something like that again and I reply that I simply can’t. I can’t keep all that in my head at once anymore. Why, on ‘Notion,’ I used to work 30 hours at a stretch – you’ve got to have youth to do that.“I don’t know how the book fares on re-reading, 20 years after my initial reading. Maybe one must also “have youth” to really embrace the novel’s sprawling, non-linear, 627 page narrative. I do know, however, that I will always be mesmerized by the “the hysterical crashing of tributaries as they merge into the Wakonda Auga River…”