Splattery Will Get You Somewhere: Fractal Forgery

"Convergence" Click to EnlargeIn a bit of fractal irony, the latest Jackson Pollock controversy concerns whether or not recent paintings that have turned up are really his, or whether they are forgeries.On one side are art experts who claim that the paintings are real. On the other side is physicist Richard Taylor, who was the first to publish definitive studies of Pollock’s works that found a fractal nature that increased during his career. (For an excellent intro. to Taylor’s findings, see J. Ouelette’s 2001 piece in Discover Magazine)Taylor suggests that the newly-discovered Pollocks may be fake because they display a different fractal character than what he has measured in works that are definitely Pollock’s. (Click here for the story.)So for all of you on the side that fractals can’t be art, here we have paintings denied authenticity because they aren’t fractal enough.But this raises a very interesting question, and contradiction. If the paintings are forgeries, were they done by a computer? If so, why didn’t they match the fractal properties of Pollock’s works as measured by Taylor (fractal dimensions in the 1.5-1.7 range)? It would seem to be a simple matter to turn the dial on the fractal-generating software, choosing the appropriate fractal dimension of the counterfeiters desired Pollock period. However, if the paintings are forgeries not done by computer, then whoever painted them was a first-rate counterfeiter.There is an even deeper issue here, one that may be the most crucial because it touches on society’s ability to bestow the label of genius. As written by Don Foster in his NYT piece of Feb 19, 2006:

At the heart of the controversy lie critical questions about artistic meaning and value that have vexed literary scholars no less than art historians. Would the exposure of a hitherto successful forgery diminish Jackson Pollock’s reputation as a unique creative genius, by demonstrating that his work is replicable?

Appropriately, Foster does not stop at the artist, and asks the fundamental question: is something that has passed for the real deal really worth less as art? Is the art in the piece, or is it an impossible-to-deconvolute amalgam of the piece, the artist, and the context of the times in which it was created?Ultimately, Foster’s answer may be viewed as a too-clever attempt to use the context of Pollock’s times to remove the question:

Meanwhile, Jackson Pollock may be chuckling in his grave: if the object of Abstract Expressionist work is to embody the rebellious, the anarchic, the highly idiosyncratic- if we embrace Pollock’s work for its anti-figurative aesthetic- may faux-Pollock not be quintessential Pollock? May not a Pollock forgery that passes for authentic be the best Pollock of all? 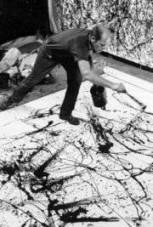 The Fractal-Pollock fracas has inspired a large number of inspired blog posts. One interesting counter can be found on the New-Art blog of "VVoi."A more detailed, and ultimately more damning rebuttal appears on John Haber’s The Fractal Geometry of Vision: Pollock’s Patterns and Rembrandt’s Eyes . Haber expands on the debate by comparing the complex, contextual aspects of attribution in both art and literature, ultimately asserting that Foster asks the wrong questions.I can only thank all the students of Chaos and Fractals, Fall 2005 edition, for asking the right questions about the validity of fractal art.