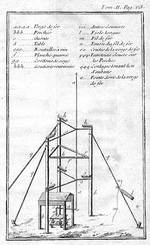 French lightning-rod experiment based on Franklin’s ideas. Click to enlarge.The lightning rod is considered to be one ofBenjamin Franklin’s greatest inventions, combining basic scientific discovery, understanding,modeling, predictionand intuition in producing a truly life-saving device. Certainly it is one ofhis most useful, and essential. To produce such a device meant learning about the nature of lightning,which first had to be shown to bea manifestation of electricity - itself a poorly understood phenomenon in the 18th Century. Franklin’s work is part scientist, part engineer, and wholly practical - a homeowner trying to protect his house and family from the vicissitudes of electrical storms.

Some excellent sources on lightning rods and Franklin can be found in The Jan 2006 issue of Physics today (by E. Philip Krider)and at Answers.com.

Interestingly, lightning rods were the subject of intense religious debate at that time. In a manner not unlike the religious right’scampaigning against -take your pick -genetic engineering, cloning, stem cells, etc. - research, lightning rods wereviewed as "presumptuous" because they interfered with the will of God. Franklin had anticipated this reaction, but even his prefaceto the 1753 editi0n ofPoor Richard’s Almanac describing the discovery of rods as a gift from God did not stem the cry. Here’s Franklin:

It has pleased God in his Goodness to Mankind, at length to discover to them the Means of securing their Habitations and other Buildings from Mischief by Thunder and Lightning.

Consider the argument against lightning rods, and what it implies about a Creator. It is certainly a vengeful God who would not want us to protect ourselves if we could. Given that churches were often the sites of extreme lightning activity due to their soaring steeples and metallic bells, maybe it was natural for priests and clergy to occasionally wish that their place of worship, rather than being a sanctuary of safety, was instead a stage for manifestations of God’s wrath. Note the paradox on the flip side of the picture, however - God is powerful enough to cause lightning to punish earthly sinners, yet isso powerless that he couldn’t come up with another method if lightning were not available?

It is natural for opponents of new, cutting-edge science to resort to scare tactics, and gloomy prognostications of the calamitous effect of unleashing unseen forces. But conjuring up a God who will do even worse - byasserting that God will bring on Armageddon because of scientific attempts to understand nature and use it for our own well-being brings us all back to the 18th Century and before.

Without a rod, and without a reason to do all that we can toimprove our health and safety.

There must be strongly enforced safeguards in all research that involves the human condition - not outright bans in the name of a vengeful creator. As we have seen, this stanceonly leads to paradoxical results about the powers, or lack thereof, of sucha creator.