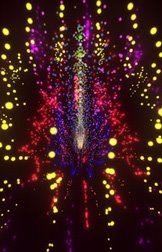 Swarm theory is an idea animating contemporary art, science, design, digital media, and social theory. “Swarm logic” is seen in works that use vast numbers of small parts to create systems whose final behavior or effect cannot be wholly predicted. Artists working with computers and new media construct rules that draw together data and generate behaviors that evolve over time. Sculptors and painters create structures and patterns based on the interrelationships and inherent properties of individual elements. Swarm connects the social life of bees, birds, crowds, and cities to contemporary aesthetics, as seen in the fascination of artists and designers with how simple, discrete units accumulate into complex systems.

I have long been ambivalent about art made by clumping. At a glance itcan appear simple-minded - take one “hand grenade” and multiply to infinity.There’s no denying, though, that in art as well as in nature simple multiplication can produce aesthetically powerful and beautiful results, especially when the individual building blocks aren’t very prepossessing.“Swarm” isn’t entirely about creating elegant structure; process and how it’s controlled are presented as equally important, especially in systems that exhibit communal decision-making.

Read the entire Sozanski piece - he did not like everything he saw. Nevertheless, isn’t the idea of SWARM further fuel against those who discredit fractal art?

It’s hard to argue with the fact that “simple multiplication can produce aesthetically powerful and beautiful results. “

To all fractal artists: keep on multiplying…to infinity and beyond…

“Swarm” continues at the Fabric Workshop and Museum, 1315 Cherry St., through March 18. http://www.fabricworkshop.org/