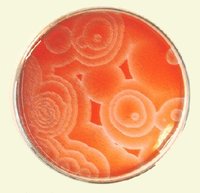 The B-Z reaction underway…Recently, R. Frederick Ludlow and Sijbren Otto, both at Cambridge, published a paper in Chemical Society Reviews calling for a new type of chemistry. Titled Systems Chemistry, their approach "deals with the emergent properties of interacting chemical systems or networks. In other words, properties that result from the interaction between the components in a network, rather than any one species acting individually."

Systems Chemistry is a different way of looking at patterns that emerge in space and time because of the complex interplay among/between constituent reactants and reactions. (Not surprisingly, the Belousov-Zhabotinsky reaction is a canonical example of the complex results of a complex system.)

Complex chem systems are either under thermodynamic (equilibrium) or kinetic control.

The authors point out that chemical systems are good models for certain biological systems, and make a rather bold prediction:

The ability of synthetic chemical networks to mimic some of the features of much more complex, but fragile, biological networks makes them ideal model systems, from which we can hope to gain some insight into the common organizational principles behind a range of complex networks. This may in turn lead to a better understanding of how to modify biological systems effectively, engineer more complicated functional systems, or even provide us with clues to the origin of life.

This sounds great, but until life is actually observed as an emergent property of a complex heap of lifeless goo, the Intelligent Design community will most likely ignore the results of systems chemistry in the same way that emergent properties in complexity theory are ignored.

The authors’ tutorial on Systems Chemistry can be found here.

(And thanks to Michael Prushan in La Salle Chemistry for introducing me to Systems Chemistry.)