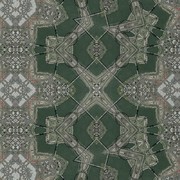 Portland - The Fractal (Click to enlarge)One of the craziest art efforts out there is the geospatial art of Nikolas Schiller. Schiller takes satellite photos of cityscapes and melds them into quilts, morphs them onto spherical surfaces, and, basically anything else he can think of. The net result is a set of amazing images of familiar cities looking as if viewed through kaleidoscopes. Many of the images remind me of Escher, only with buildings and landscape features serving as the interlocking escher-figures, receding to infinity at the edges.

Maybe more insane is Schiller’s pace: a new map every few days for several years now, all posted on his Daily Render blog, subtitled A Digital Scrapbook for Past, Present, and Future.

The fractal connection is an obvious one, and Schilling has a special section devoted to images that are more fractal-like. (See the Dupont Circle tessellation, e.g.)

Schiller’s motivation is artistic and political. As described in a Washington Post article by D. Montgomery,

... Schiller remixes this surveilled reality to render geography as politically pointed art..."To change the world, start with the maps," says Schiller, who is co-chairman of the Statehood Green Party in Washington. "As insignificant as my art may be, it's still an extension of my feeling that each of us has the capacity to change things."

One of the computer sessions in the Chaos and Fractals class is devoted to experimentally determining the covering dimension of a coastline, effectively finding its fractal dimension. Schiller’s images should be amenable to the same type of analysis. An interesting assignment would be to find the covering dimensions of his renditions of DC’s Dupont Circle and compare it to his fractal tessellation of the Interstate 35W bridge in Minneapolis, Minnesota.

Schiller sells his prints through imagekind.