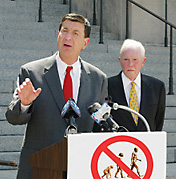 This just in from the Nov. 28, 2006 Onion - Kansas Outlaws Practice Of Evolution:

TOPEKA, KS - Any living being that undergoes genetic modification favoring survival could face jail time under the new law.

A really clever piece on our favorite state, Ienjoyed reading it today probably a whole lot more than if I had seen it yesterday - a day of unfortunate and fortunate events.

I was atPenn State attending a meeting of the Scientific Benchmark subcommittee of the PA Governor’s Commission on College and Career Success. The subcommittee’s charge includes proposingrevisions to the current PA state teaching standards. This was my first meeting, and I was amazed to meet such anenergetic and dedicated group of secondary and higher-ed facultyworking on this important project. Everyone in the room has one overarching goal - to ensure that ALL studentslearn essential mathematics and science concepts and skills- necessary for success in today’s, and especially tomorrow’s world.

This was the fortunate event.

The unfortunate events were myreading two disturbing articles earlier in the day. In one, I read a report of the August survey done by Jon Miller of Michigan State University.The results of the poll suggest that only 40% of the U.S. believe in evolution (BTW, the only country with a smaller percentage is Turkey, while countries such as Sweden and Denmark have an 80% belief rate) Miller’s study attributes this disturbing dichotomy as a perfect-storm effect of religion, politics, and LACK of GENERAL SCIENTIFIC KNOWLEDGEof core biological ideas. (Check out the National Geographic report on the poll.)

The other article was even more depressing: The Chronicle of Higher Ed reported thatin a survey by the American Council on Education, 46% of those polled said that colleges and universities should not require students to take more courses in math and science, while 46 percent said students should be required to do so. This deep division is evidence that all of the messages and news about American students falling farther and farther behind in terms of essential skills for the 21st Century are not being heard.(Click hereto read the original study -"Math and Science Education and United States Competitiveness: Does the Public Care?")

Where is the Math/Science PR?With the constant stream of news stories about American students falling further and further behind the rest of the world’s students, itseems to be everywhere, but no one (or at least 40% aren’t listening.

Luckily for me, but really luckily for our students and our country, the fortunate event outweighed the unfortunate events. The effort to make science standards the best they can be as a preparation for our students’ future successwill also produce a perfect PR machine, as students who are successful realize that it was the mathematics and science that formed the foundation of their success.And the students who follow them will generate the demand that will lead to more math and science at all education levels.

Then we won’t be in the 40-40 club anymore, which will be quite an evolution!