The Frontier of Art and Mathematics: 2006 Mandelbrot Fractal Art Contest 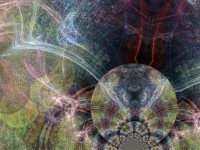 The ubiquity of fractal art can be observed with a simple web search, where a recent google query yielded 640,000 hits. Some will claim that thisfact does not convey any artistic status to fractal images, only that an awful lot of folks name their works fractal art.

Which is why I’m happy to see that some big-time mathematics groups are finally recognizing the potential for creative artists to produce captivating art - even if they don’t know the mathematics.

Earlier this year (August, 2006)the International Congress of Mathematicians (ICM) - the group that decides therecipient of the Fields Medal (the world’s top mathematics prize) includeda fractal art exhibit. The exhibitors were chosen after competing in the2006 Benoit Mandelbrot Fractal Art Contest. Please visit the site where you’ll be able to see the winners as well as a number of other entrants.

The promo for the exhibit does a great job of arguing for the existence of fractal art that is truly art:

The exhibition is formed by a collection of computer generated images by a group of artists and/or scientists specialized in fractal art. The mathematical expressions and the parameters used confer a unique and distinctive colour and aesthetics to every image. Much like painters and sculptors transmit their personality and sensibility to their works by means of their technique, the authors of this exhibition express themselves by means of formulae and algorithms, modifying them progressively until the desired goal is obtained; reaching the frontiers between Art and Mathematics. The synthetic computer generation of every picture may look cold and mechanical, but behind every picture there are hundreds of hours of work in the formulae, algorithms and parameters generating the picture. These artists use computer and fractals (and mathematics, in general) like a painter uses canvas and paint-brushes: creating a piece of art allowing us to capture sensibility and emotions; just like any artwork.

I actually like one of the non-winners’ works the best: Pere Soto, whose Alien Images of Coca-Cola appears at the top of this post. Soto is both a guitarist and a digital artist. His web site is definitely worth exploring - while most of it is dedicated to his music, his web design is beautiful. (You will also find a gallery of his digital artworks.)

With the ICM held in Madrid (the contest was sponsored by the Fundación Española para la Ciencia y la Tecnología (FECYT)-i.e. the Spanish Foundation of Science and Technology), perhaps it’s understandable that there are quite a few Spanish participants in the contest. Or maybe it’s just that there’s something endemic to the culture that produced Goya and Dalí that fosters the embracing of new formsand techniquesthat push the limits of artistic representation.