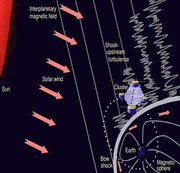 Turbulence in SpaceTrying to model and understand turbulence is one of the main thrusts of chaos theory. So it may be a good thing or bad, depending on where you are chaotically, that more turbulence has been found - this time in deep space.

As reported in APS Physics News for 2006:

If you think chaos is complicated in the case of simple objects (such as our inability to predict the long-term velocities and positions of planets owing to their nonlinear interactions with the sun and other planets) it's far worse for systems with essentially an infinite number of degrees of freedom such as fluids or plasmas under the stress of nonlinear forces. Then the word turbulence is fully justified. Turbulence can be studied on Earth easily by mapping such things as the density or velocity of fluids in a tank. In space, however, where we expect turbulence to occur in such settings as solar wind, interstellar space, and the accretion disks around black holes, it's not so easy to measure fluids in time and space. Now, a suite of four plasma-watching satellites, referred to as Cluster, has provided the first definitive study of turbulence in space. The fluid in question is the wind of particles streaming toward the Earth from the sun, while the location in question is the region just upstream of Earth's bow shock, the place where the solar wind gets disturbed and passes by the Earth's magnetosphere. The waves in the shock-upstream plasma, pushed around by complex magnetic fields, are observed to behave a lot like fluid turbulence on Earth. One of the Cluster researchers, Yasuhito Narita ([email protected]) of the Institute of Geophysics and Extraterrestrial Physics in Braunschweig, Germany, says that the data is primarily in accord with the leading theory of fluid turbulence, the so called Kolmogorov's model of turbulence. (Narita et al., Physical Review Letters, 10 November)

Kolmogorov is one of the famous trio Kolmogorov - Arnold - Moser. after whom the KAM theorem is named. Ironically, the KAM theorem shows the existence of quasi-periodic orbits in a chaotic solar system. The idea of stability within turbulence is an archetypal chaos construct.