Click for the Heisenberg CafeThe underlying structure of the Chaos and Fractals course is the understanding-prediction continuum. Starting with the Chaos Game and proceeding through all of the readings and Classroom Chaos exercises, the elusiveness of true understanding of non-linear dynamical systems and the need to "settle" for mere prediction is common and unsettling. One can only wonder, then, about the possibility of true understanding of anything more complex than linear processes. Maybe this inability to understand is a symptom of a world that is fundamentally unknowable. Now I should know better than to leave the understanding-prediction axis and question the fundamental nature of reality. Jumping into the philosopher’s sandbox is often a prescription that leads one to lose sight of the day-to-day business of actually doing science or mathematics. So let me turn to those who really could live in that sandbox, mix it up with the philosophers, and jump out again to do their science and mathematics. 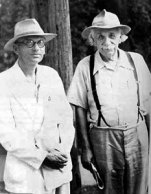 The defining work of 20th Century science and mathematics may just be the development of theories that posit fundamental limits to what we can do, what we can measure, and what we can know. Einstein’s relativity rests on the postulate that the speed of light is constant in all reference frames; a result that leads to limits on the velocity of particles with mass, and destroys the notion of absolute time and simultaneity. Heisenberg’s Uncertainty Principle puts an inviolable restriction on what we can measure and therefore know about a physical system. Gödel’s Incompleteness Theorem denies us the possibility of knowing or proving all mathematical truths. Do these limits tell us something about the world, or just about our ability to understand the world? Einstein, Heisenberg, and Gödel were very clear on this question: they believed that they were discovering the true nature of the world. This point is espoused by philosopher Palle Yourgrau in his book "A World Without Time: The Forgotten Legacy of Gödel and Einstein":

Einstein, Gödel, Heisenberg: three men whose fundamental scientific results opened up new horizons, paradoxically, by setting limits to thought or reality. Together they embodied the zeitgeist, the spirit of the age. Mysteriously, each had reached an ontological conclusion about reality through the employment of an epistemic principle concerning knowledge. The dance or dialectic of knowledge and reality – of limit and limitlessness – would become a dominant theme of the 20th century.

Ok. Back out of the sandbox and back to work. If the world is unknowable, I don’t want to know it. In fact I don’t want to think about it - it’s time to get back to modeling and prediction. And if I don’t really understand what’s going on in my dynamical system, or why my predictions work, who is going to know it? (Heisenberg cartoon by Mark Stivers)
Categories   Philosophy   Understanding & Prediction