Where the Hell Are They? Now pass the pasta... 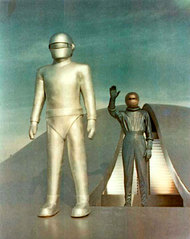 Klaatu barada niktoOne of the great lines in all of 20th century science was uttered over lunch by Enrico Fermi. In a discussion of the possible likelihood of many advanced civilizations in our galaxy, Fermi said something to the effect of "well, where the hell are they."

I may have taken some liberty in the way Fermi expressed himself, but there’s no doubt that Fermi’s questions is one of the more provocative off-the-cuff statements ever made because of the response that it generated, including immortalization as a named dilemma: The Fermi Paradox.

In 1961, approximately 10 years after Fermi’s lunch-time query, Frank Drake developed an equation that he used to predict the number of advanced civilizations in our galaxy. Upon reading about the Drake Equation many years ago, I was struck by its simplicity and its audacity. Here it is in its full glory. (Read all about the parameters here ) N = R* fp ne fl fi fc L

The equation consists of a chain of probabilities, all multiplied together in the fashion of the probability of a string of independent events. Depending on the values of the individual probabilities, estimates of the average number of advanced civilizations/galaxy range from several thousand to less than one.

Not a very helpful predictor! Although it does keep SETI in business.

So Drake is a model of a modeling process. This is a remarkable achievement for something designed to answer Enrico’s lunch comment.

I was reminded of all of this Drake stuff b/c of a very provocative article just released on Technology Review by Nick Bostrom. Titled (naturally) Where are They?, Bostrom describes how the lace of any ET sightings by SETI suggests the presence of a Great Filter that makes one or more terms in the Drake equation so small that it effectively precludes us from seeing evidence of other civilizations. In what might one day be named The Bostrom Paradox, Bostrom goes on to describe how, if any evidence is found of life on other planets, say Mars, then this would really be bad news. Not only that, but "the more complex the life-form we found, the more depressing the news would be. I would find it interesting, certainly–but a bad omen for the future of the human race. "

Now if these statements don’t whet your appetite for more, then it’s a good thing you weren’t eating lunch with Fermi that day.