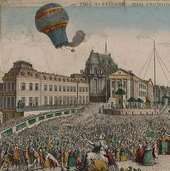 Montgolfier Balloon over Paris, 1783. Click to enlarge.Sometimes prediction is easy without any understanding. Take driving a car, for example. Stepping on the gas causes the car to accelerate if it is in gear. How many drivers actually understand why this happens, short of the basic guess that "more gas" somehow got to the engine? Clearly one doesn’t have to understand anything about internal combustion engines to predict what will happen when the engine gets more gas, or gets the wrong octane gas, and so forth.

So Prediction without Understanding is a common occurrence.

A related happenstance is when accurate prediction occurs even with a totally incorrect understanding.

Consider the first human flight, which occurred on Nov. 21, 1783 when two Frenchmen ascended above Paris in a hot air balloon. The balloon was designed by the Montgolfier brothers, who believed that thick smoke caused the balloon to stay in the air. Of course, the thick smoke was a byproduct of whatever they burned in the fire at the throat of the balloon , but it was the hot air (less dense air) caused by the fire that actually led to the balloon floating.

OK, so the Montgolfiers weren’t that far off - you don’t have to dig too far to find the connection between thick smoke and hot air, after all. But this example does raise a more interesting question: when is it the case that understanding is totally lacking, yet predictions are right on?

I have read tales of grudging acceptance of Einstein’sspecial relativity in which relativity’s predictive power was acknowledged, but the basic postulates were not, i.e.some were aghast at the essential strangeness of the universeas postulated by Einstein. They were claiming then that understanding of the universe was sorely lacking in a theory with great predictive power.

Einstein himself fell was not beneath this same claim about the work of others: he fought notoriously against the probabilistic interpretation of quantum mechanics, and especially the Copenhagen Interpretation of Bohr and Heisenberg. He admitted the predictive power of the theory, but denied the underlying interpretation, in effect stating that Copenhagen adherents did not have the correct understanding of the reality.

So where does this lead? Isn’t it enough to say that prediction is understanding? If a model predicts accurately, doesn’t that mean that whatever is beingmodeled is "understood" at some level? While this approach is probably OK in many situations - I know what type of gas to put in my car to get it to run better, even though I don’t know a thing about octane, e.g., there is a fundamental problem with not being diligent about seeking the deepest level of understanding possible. Simply stated, if there is no physical basis to the model that yields the predictions, there will always be that hesitancy to trust the prediction - almost as if the prediction is a result of a lucky guess, and maybe we won’t be so lucky next time.

Note that this position is itself the result of an overriding model of the universe: thatthe stuff of the universe obeys basic "laws" - Newton, quantum, and so on. But without this belief in laws, without this understanding of basic physics principles and the predictions that flow from models based on these principles, how does one explain that people were willing to sit in a hot air balloon over Paris in 1783?